In early June 1643, Iroquois assembled in the west cap of Montreal Island and decided to conduct a first strike against Ville-Marie. Some forty Iroquois attacked the settlement.

Ten of the Iroquois fell on six French, who were cutting woods, surprising them in the midst of their work.  The others moved toward the palisades to give the impression of an attack on the settlement. Three colonists of the group of six were killed and scalped while the other three were taken prisoner. One of them escaped. He returned to the village in a damaged canoe after filling the holes with grass.

The other two were killed after torture. The survivor reported that he had seen the Iroquois hide a large quantity of furs they had taken in a confrontation with a group of Huron, so Maisonneuve allowed the settlers to go take the goods. The French became an object of hatred for the Iroquois because they had come to an agreement with the first nations they had met in Canada, thus the Huron and the Algonquin.

If the route of French penetration had been the Hudson River rather than the St. Lawrence, exactly the opposite would happen. 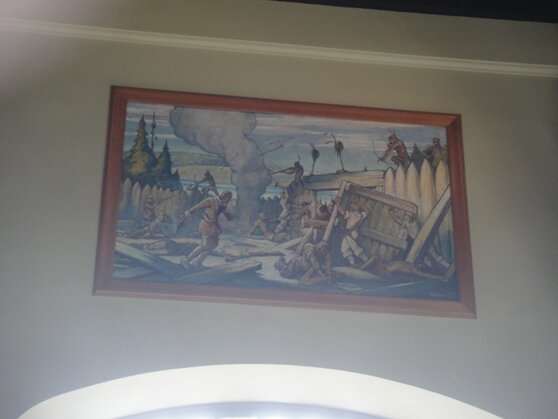 The names of the three first colonists killed in Montreal in June 1643 are: Guillaume Boissier from  Limousin, Bernard Berte, from Lyon and Pierre Laforest Lavergnat, supposedly from Auvergne.

These people head a  long list of pioneers perished in that long war for Montreal. See also:

The First Cross over Mont-Royal

Paul de Maisonneuve kills the Chief of the Iroquois