The Montreal Museum of Fine Arts (MMFA) has opened an expanded sculpture garden at their entrance, making it one of Canada’s largest collections of public art. One street along the museum has been transformed into a pedestrian mall during the summer months.

The museum and city government worked closely to design the project and there are over twenty art works. In this outdoor gallery, the design team made up of Wade Eide, an architect with the city, Julie St-Arnaud, a landscape architect, Gilles Arpin, a lighting designer, and Adad Hannah, an artist, set up a set of “collaborative design workshops” to create basic concepts for a ”unified” environment for the Montreal Museum of Fine Arts four pavilions.

The project led to changing the geometry of two streets, including widening sidewalks to increase street space for pedestrians. The art and streetscape material elements are enhanced by the addition of a dozen new native trees, including Ironwoods and Accolade elm trees.

The whole sense of this nice project is about creating a sense of simplicity, utility, and noblesse, while offering  to all of us an outdoor exhibition space that provides a ”neutral background” for the sculptures. 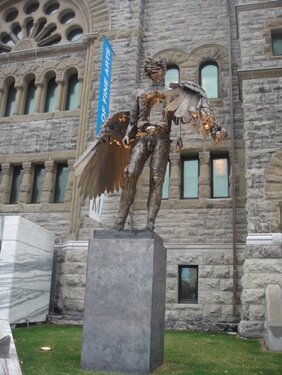 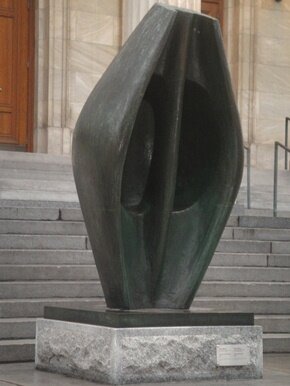 Large Totem Head is a prime example of Henry Moore’s belief that a sculpture should have a sense of mystery in order to maintain interest. Photo: © ProvinceQuebec.com 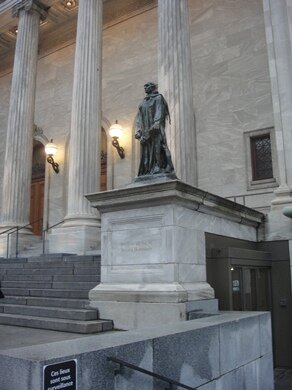 This 1966 casting of Auguste Rodin's 1887 sculpture, Jean D'Aire sits on the eastern end of the staircase of the museum, en face of Michal and Renata Hornstein Pavilion. The sculpture, from the group The Burghers of Calais, was purchased by Max Stern from an exhibition in honor of the 50th anniversary of Rodin's death. The piece was bequeathed to the museum after Max Stern died in 1987. Photo: © ProvinceQuebec.com 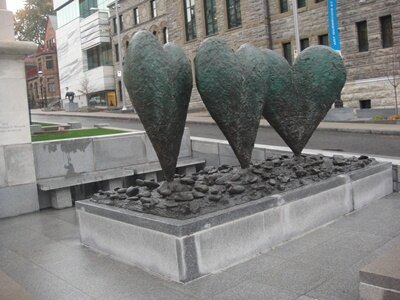 Three Hearts on a Rock, by Jim Dine, an American artist from Cincinnati. Bronze. Photo: © ProvinceQuebec.com 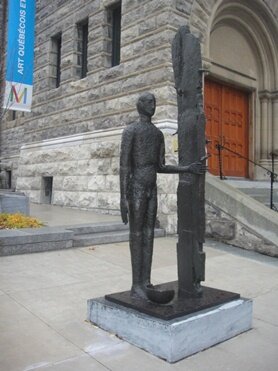 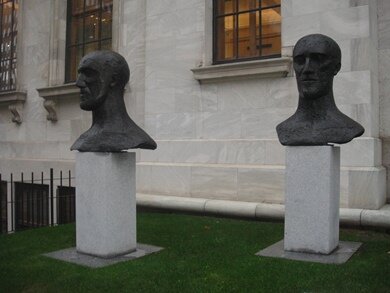 Two head busts entitled In memoriam I and In memoriam II by British artist Elisabeth Frink (born in 1930, Thurlow, England and died in Blanford Forum, England, in 1993) were made in 1981 and is part of an edition of 6. On loan from Michael Boyd. Photo: © ProvinceQuebec.com 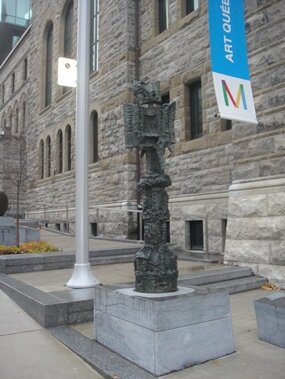 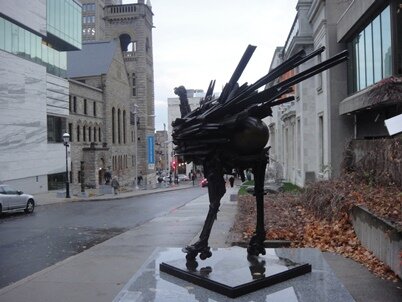 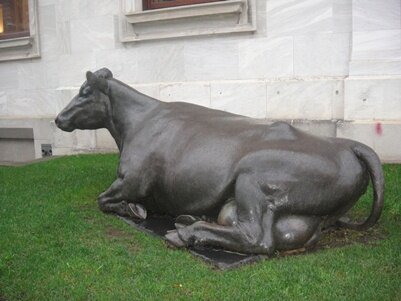 A sculpture by Canadian artist Joe Fafard of a cow named Claudia made of bronze in 2003. Photo: © ProvinceQuebec.com 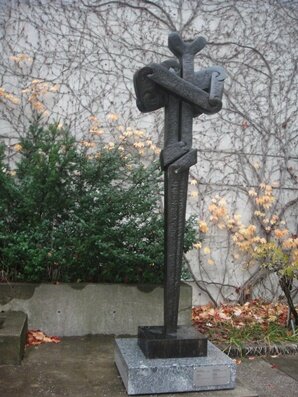 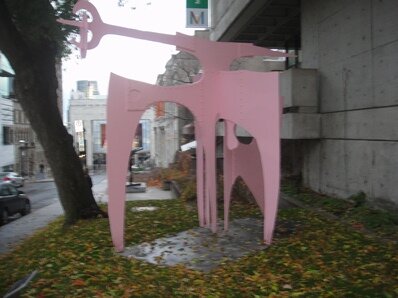 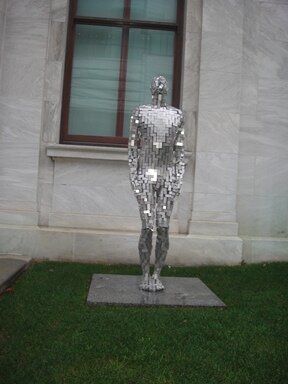 Building VI by British artist Antony Gormley, made in 2003, represents a man made of stainless steel blocks. Photo: © ProvinceQuebec.com 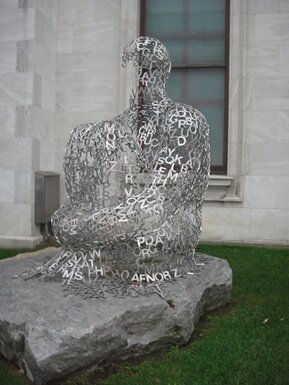 Shadows II by Jaume Plensa from Barcelona, born in 1955. Stainless steel, sculpture made in 2007. On a loan from Georges Marciano, creator of Guess Jeans. Photo: © ProvinceQuebec.com 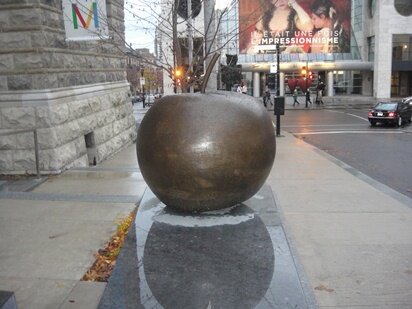 A bronze apple called Pomme de Londres by French artist Claude Lalanne, born in Paris in 1926. This creation is part of an edition of 8 and was made in 2007. Another piece that is on loan from George Marciano, creator of Guesse jeans. Photo: © ProvinceQuebec.com 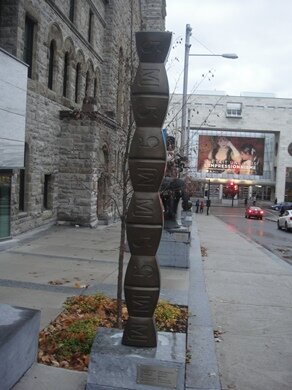 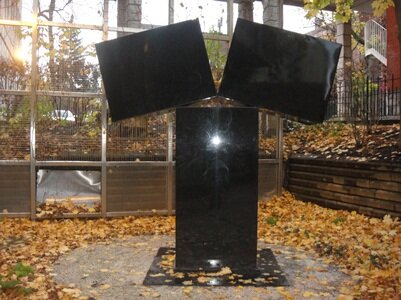 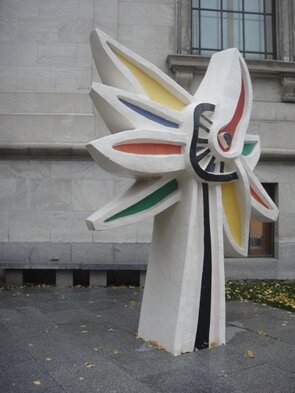 Le Tournesol polychrome (1952) by Fernand Léger (born in Argentan, France in 1881 and dead in Gif-sur-Yvette near Paris in 1955), loaned to the museum by Georges Marciano. Photo: © ProvinceQuebec.com 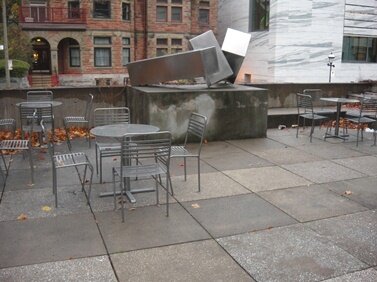 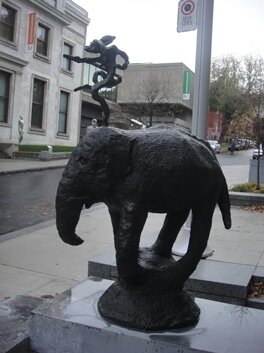