Snowdon is a neighbourhood located in the Côte-des-Neiges–Notre-Dame-de-Grâce borough of Montreal. The sector is centred around the intersection of the Decarie Highway and Queen Mary Road and it’s served by the Snowdon metro station.

Snowdon is a primarily residential neighbourhood, named for James Snowdon, who owned a farm where the neighbourhood now stands.

Queen Mary is a large, 4 lane road that expands up from a small residential street west of Decarie until it intersects with Cote-Des-Neiges Boulevard in the east. You can find restaurants, grocery stores as well as several kosher eateries there. You will also encounter the Marie-de-France College, as well as the impressive St. Joseph’s Oratory, located on the right just before Queen Mary Street reaches the intersection with Cote-Des-Neiges.

Snowdon metro station has three parallel vaulted tunnels; the blue line platforms on one side, the orange on the other, with the stacked corridors running between them to the mezzanine and entrance. The tunnels are joined by smaller transverse tunnels. The station is on Queen Mary near Decarie. It houses both the short Blue line as well as the much longer Orange line.

The stretch of Victoria Avenue runs through the heart of the Snowdon neighbourhood. It’s one of the more ethnically diverse areas in Montreal and many newcomers settle in this area. As a result there are food shops and clothing stores that reflect a global range of tastes.

Key features in the neighbourhood include the former Snowdon Theatre. 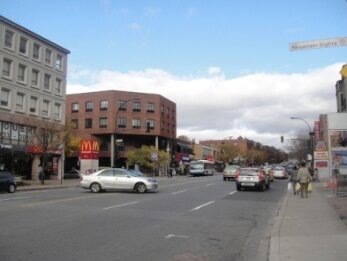