The heart and soul of Hochelaga-Maisonneuve

The Dufresne brothers were great lovers of art who modelled their home on the Petit Trianon of Versailles in France.

Built between 1915 and 1918, the Chateau Dufresne, which consists of two separate residences, is a true architectural gem featuring Ionic columns, Italian marble staircases, exotic hardwood floors and lavish furnishing – all of which attest to the brothers’ refined tastes.

The chateau features a profusion of sitting rooms, oriental smoking rooms, winter gardens and offices, each decorated in a different style, depending on the atmosphere the brothers wished to create.

The murals of Guido Nincheri, one of the most important North American artists of the 20th century, are equally noteworthy. The residence represents Nincheri’s largest body of secular work in Canada

During their lives, Oscar and Marius Dufresne surely had no inking that they would one day be seen as two of Montreal’s most illustrious sons – the proud symbols of French Canadian social success. And yet, through their genius and passion for art, the brothers who erected the Chateau Dufresne, a true gem of Beaux-arts architecture, also helped beautify the former Cite Maisonneuve.

Oscar Dufresne was Chairman of the Finance Council of Cite Maisonneuve and Marius was a civil engineer and architect. As a team, they were unmatched when it came to producing magnificent architectural plans – and finding the necessary funding to turn those plans into buildings.

Marius had exceptional talent, thus most of the prestige buildings in the Meercier-Hochelaga-Maisonneuve district were designed by Marius. The history of the Chateau and its inhabitants paralleled the industrialization and rise of the bourgeoisie in east Montreal, giving the building immense heritage value. 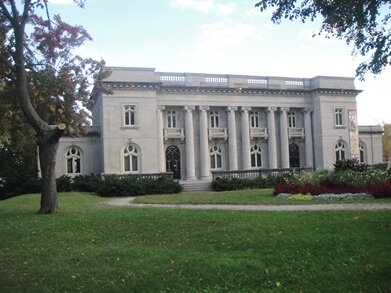