Where did he land?

Where did he land?

Where did he land?

On October 2, 1535, Europeans reached Montreal Island for the first time. Nowadays, most historians believe that the French landed where the Jacques Cartier Bridge stands today. Other historians support the hypothesis that the expedition reached Montreal Island not through the St. Lawrence, but through the Des Prairies River. Aristide Beaugrand-Champagne, an architect with a passion for history, presented this theory for the first time in the 1930s.

According to Cartier, on October 3, 1535, along with twenty well-armed sailors and gentlemen, he walked from the shore, where the French had landed, to the village. After about a league (about 3 mi) and a half, they met one of the leading lords of Hochelaga, but they still did not reach their destination. They continued walking and, about half a league away from there, saw the tilled fields.

If Hochelaga was at the foot of the mountain, about where McGill University is today, why did Cartier have to walk two leagues (about 6 mi) from the St. Lawrence to reach it? According to Beaugrand-Champagne, that distance would be reasonable from the foot of Gros Sault in the Des Prairies River.

Anyway, no one has ever conclusively determined the site of the old Iroquois village of Hochelaga. The question that has been the subject of many discussions remains a mystery. 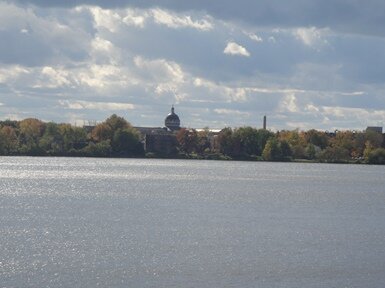 Montreal as seen from the Des Prairies River. Photo : © ProvinceQuebec.com