On October 2, 1535, the French arrived at Hochelaga, an Iroquoian village on the island of Montreal, as we call it today. More than a thousand people greeted the sailors. Many children were brought to the French to touch them. Cartier offered presents to the villagers. Then the sailors withdrew to their boats for the night, while the natives danced and lit fires on the beach.

Living in their village, these first nation people were settled and belonged to the Iroquois Confederacy of Five Nations.

On October 3, the explorers visited Hochelaga for the first time. The village was surrounded by tilled fields, full of the wheat “which is like the millet of Brazil.” Cartier described Hochelaga as a large settlement of about fifty houses.

Surrounded by a wooden palisade, the village was built in a circle. At several points along the wall, there were galleries with ladders ascending to them. Rocks and stones were stocked up there for guard and defense.

Wooden house, about fifty by fifteen paces large, had roofs and sides made of strips of bark or of wood.

According to Cartier, each house had individual rooms for family members and a living room with a fireplace and a garner.

Cartier reported that the natives considered the French to have supernatural powers of some kind: the chief, lying crippled on a deerskin, asked the captain to touch his legs and arms hoping to get cured. Right after that, according to Cartier’s log, “many sick persons were brought to Cartier, some blind, others with but one eye, others lame or impotent and others so extremely old that their eyelids hung down to their cheeks.” Moved by such trust in him, Cartier devoted a couple of hours to making the sign of the cross over the sick Natives.

The village of Hochelaga looked built as a strategic site. Indeed, the inhabitants oversaw canoe traffic on both sides of the island and levied tribute on non-Iroquois who wished to use any of the rivers nearby: the St. Lawrence, the Des Prairies River, and the Mille-Iles River.

On October 4, the French returned to their ship, the Emerillon. The next day, they left Hochelaga and after a six-day sailing they reached the St. Charles River.

This account presents the oldest description of the Montreal Island’s original settlement.

The Iroquians : The fertile lawlands of the St. Lawrence River and the Great Lakes were occupied by groups of Iroquoian, semi-sedentary Amerindiens, dependent of on the cultivation of corn, squash and beans. They lived in villages which they moved from one place to another every 10-15 years, and which were surrounded by wooden palisades. The villages comprised some 50 long-houses, each lodging a few dozen individuals under the leadership of a mother of her daughters. Some Iroquoian tribes had sophisticated political structures, and when grouped together formed a great confederacy of tens of thousands of individuals.

The Algonquiens: Small groups of patriarchal nomads belonging to the Algonquien language groups lived and gathered foodstuffs over a great expense of woodland in Eastern Canada. Little groups gathered along the waterways in summer to make contact with other Amerindians in order to engage in diplomatic and commercial exchanges. Their way of life dictated that their possessions be easily portable. During the 17th Century, the Montagnais, an Algonquien tribe, were trading partners of the French around Quebec and Tadoussac. 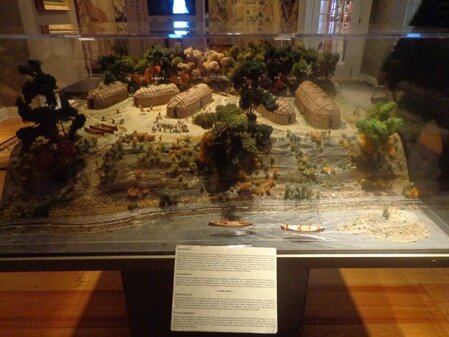