The Mount Royal Park (in French: Parc du Mont-Royal) is one of Montreal's most famous and largest green-spaces.

It occupies a 200-hectare space, with breathtaking views of the urban centre. Inaugurated in 1876, the Mount Royal Park was designed by Frederick Law Olmsted, the same who designed New York's Central Park and many other major parks in the U.S.

To Montrealers, the Mont Royal Park is a precious gem that they were able to preserve from urban development. Indeed, it is practically impossible to visit Montréal without seeing Mont Royal and enjoying the view from its summit.

Today the park is an ideal site for admiring a wide variety of plants and birds or for enjoying outdoor activities.

The park contains two belvederes, the more prominent of which is the Kondiaronk Belvedere, a semicircular plaza with a chalet, overlooking downtown Montreal. This belvedere, built in 1906, is named for the Huron chief Kondiaronk, who signed a major peace accord with New France (Canada) in 1701.

Other features of the park are Beaver Lake, a small man-made lake with a short ski slope near by; a sculpture garden; Smith House, an interpretive centre; and a well-known monument to Sir George-Étienne Cartier on the other side of the mountain. The park hosts cultural activities.

The association of the Amis de la montagne (Friends of the Mount Royal) offer a variety of services and activities that provide many opportunities to discover the beauty and wealth of resources that the park has to offer. The forest is known for its beautiful autumn foliage as well as extensive hiking and cross-country ski trails, but biking is restricted to the main gravel roads.

Montreal's No. 11 streetcar brings visitors to the peak. 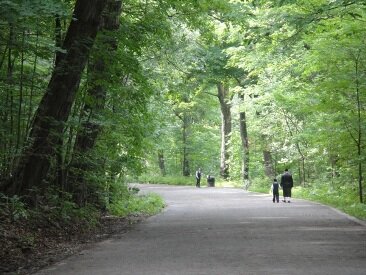 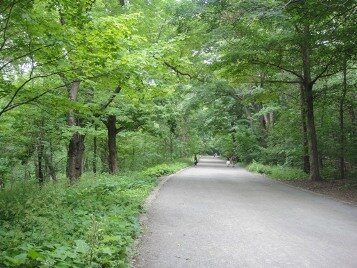