Only a few miles from Lennoxville, the Johnville Bog and Forest Park offers a protected area of 445 acres for those seeking a tranquil setting for a walk in the woods.

In good weather, walk the 2,5 miles of trails enhanced with interpretive panels. In winter time, about 6 miles of trails are available for cross-country skiing or snowshoeing, bringing you through stands of white spruce or red pines. The site ecosystem is a rarity in the region, and its ecological diversity is remarkable.

The park is administrated by Nature Eastern Townships (NET), previously known as the Johnville Woodland Conservation Corporation (JWCC), an organization committed to conserving nature, enhancing knowledge and awareness of natural environments, and contributing to training and scientific research.

The Johnville Bog & Forest Park's owners - the Université de Sherbrooke and Bishop's University, have given Nature Eastern Townships the mandate of monitoring the Park and organizing activities for the general public. The City of Sherbrooke and the Borough of Lennoxville also support NET's mission by allocating the organization an annual operating grant and providing a number of services and supplies.

The land that today makes up the Johnville Bog & Forest Park was purchased by the Town of Lennoxville between 1919 and 1946 for the purpose of building a water intake and distribution facility. Over the years, several properties with wetlands were acquired in the peat bog's zone with the goal of protecting the water source.

When Lennoxville ceased using the water in 1986, it the Johnville Woodland Conservation Corporation (known today as Nature Eastern Township) to ensure the conservation and promotion of this land in the Johnville sector.

The Université de Sherbrooke and Bishop's University jointly acquired the Johnville Bog & Forest Park in December 2010. Fully committed to the life-long conservation of the site's ecosystems, the two establishments have consented to mandate NET to manage and supervise the land.

Natural environments fulfill various functions that are vital to well-being of our civilisation, such as supplying resources, regulating climate and water balance, as well as educational and recreational functions, etc. It's basically biodiversity, i.e. all plants, animals, and micro-organisms and all of their interactions that provide these services. Hence, preserving biodiversity is a necessity to ensure the sustainable development of our society.

The Johnville peat bog plays a significant role in maintaining a high level of biodiversity in the region because it is a relatively rare ecosystem where species that are almost non-existent in surrounding environments can be found.

The topography of Johnville and the Johnville Bog & Forest Park is a result of the last ice age. Tangible signs of the Ice Age are still visible. An esker extends across the Park west of the peat bog and through the villages of Johnville and Martinville. It is composed of deposits of sand, gravel, and rocks forming long, winding, steep ridges. The presence of these deposits contributed to the formation of the peat bog by limiting land drainage to the north and the east.

The Johnville Bog & Forest Park contains ecosystems rare to the region: a peat bog and ombrotrophic ponds. These unique environments contrast sharply with the agricultural and forestry landscape around them. Hence, preserving the Park contributes to conserving the landscape's biodiversity in addition to protecting the species that live there.

The Park’s unique character can be effectively demonstrated by one simple fact: peat bogs are found on less than 1% of the area covered by the Appalachian Mountains. The majority of peat bogs are completely covered over with an accumulation of partially decomposed organic matter (peat), and few of them include bodies of water, as is the case with the Johnville bog.

More than 34 types of mosses and over 400 species of vascular plants have been found in the Park to date, 350 of these indigenous. Certain zones are ecologically rich in flora, and this is the case with the open peat bog, in particular.

The woodland area is composed of a variety of forest stands following the pattern of the topographical variations, a succession of eskers and depressions. Spruce forests with sphagnum moss typical of peat bogs, wet cedar bushes, hemlock woods, and red maple groves are all found here. Several plantations dating back more than 50 years can be found on what was once agricultural land. 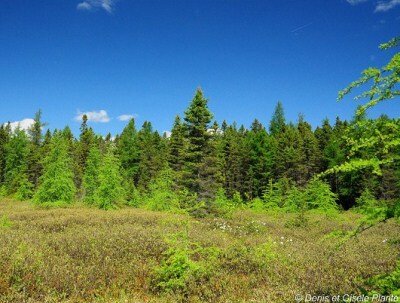 The park is also home to numerous species of wildlife. An abundance of dragonflies, damselflies, and butterflies can be found. Fourteen species of herpetofauna, 12 amphibians and two reptiles, have been inventoried.

The site is also a great site for bird-watching, where palm warblers, Lincoln's sparrows, northern harriers, and several varieties of waterfowl can be found. Park users regularly come across mammals that are very prevalent, including moose, white-tailed deer, American black bears, red foxes, beavers, porcupines, and small rodents, among others.

To date, plant and wildlife inventories have identified two species of plants designated as threatened or vulnerable (bloodroot and ostrich fern) as well as three species of vascular plants and four species of vertebrates found on the lists of species likely to become threatened or vulnerable (the white-fringed orchid, Wolffia columbiana, Clinton's wood fern, the southern bog lemming, the rock vole, the hoary bat, and the silver-haired bat).

To reach the Johnville Bog and Forest Park, take Route 108 east, then turn right onto Route 251, and travel south to Johnville. Once in the village, turn left on the North Road and continue for a little over a half a mile. 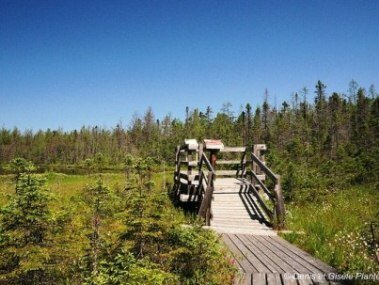