From ludicrous winners of giant pumpkin contests at county fairs to a carriage for Cinderella, squash are often at the heart of our imagination. In reality, they are part of larger family called Cucurbitaceae. There are, in fact, hundreds of kinds of squash of all colours, shapes and sizes. Despite their many properties and uses, they remain underutilized. Precious reserves of water and food for humans and animals alike, they are cultivated the world over and now enjoy renewed popular interest.

Exchanges between the Amerindians and the French: The discovery of the New World led to the introduction of new food plants in Europe, and squash was among them. Like corn and green beans, squash is one of the main vegetables in the Iroquois diet.

These plants have been grown in North America for more than 5,000 years. In the 18th century, squash were most often grown by the first colonists because they were easy to cultivate, as well they were tasty and hardy.

Squash are not just used in cooking. Some dried squash are made into musical instruments. In Africa and Asia, instruments like the balaphon, kora, sitar or shakers are made with calabash.

Did you know that squash can be eaten raw, cooked, pureed, stuffed, and even as desert. Squash are very good in pies, cakes, fruit jellies.

Tricks of the Trade with Squash: How to choose a good winter squash: The best winter squash are heavy and firm, without blemishes or scratches, and have a solidly attached peduncle.

How to preserve squash: Winter squash can keep for several months in a cool dry place. Once you have begun eating it, it can keep several days if well wrapped. It you want to freeze it, you should cook it beforehand.

Tidbit: Amerindians stored squash in their homes to preserve and protect them from freezing in winter.

How to cook squash: Steaming pieces of squash in a pressure cooker for 30 40 minutes is recommended. Once cooked, the peel separates from the flesh. The squash can be cooked more quickly in a microwave oven. Cut the squash in two, remove the seeds, wrap the halves in plastic wrap, leaving a space for air, and cook at high power for ten to fifteen minutes to make the flesh as tender as possible.

Pick a peck of Pumpkins

A multipurpose Gourd: The main use of gourds is the manufacture of containers. Available in various shapes and sizes, dried and hollowed gourds can be fashioned into many culinary objects, works of art and musical instruments.

Historical tidbit: In the Middle ages, a calabash gourd was indispensable to the pilgrim in the road to St-Jacques de Compostelle, in Spain. Indeed, it is part of the iconography of this pilgrim, along with a walking stick and a bag. This, with those to Rome and Jerusalem, was one of the three great Christian pilgrimages.

Stroll through the Governor's garden to discover all of their mysteries. 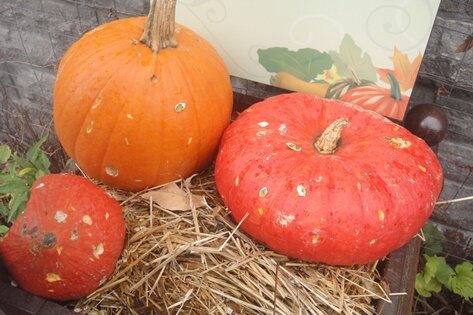 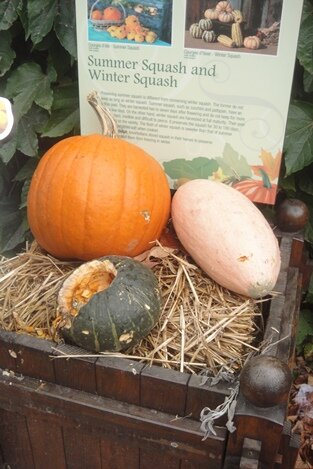