The Groulx Mountains, known by the Montaignais-Nascapi people as Uapashke or White Mountains are located in north-eastern Quebec. Their two higher peaks are Mont Veyrier at 1,104 metres or 3,622 feet and Mont Jauffret at 1,065 metres or 3,494 feet.

The mountains are named after Lionel-Adolphe Groulx, a famous priest and philosopher of Quebec. The Groulx form an alpine plateau that dominates the landscape to the east of the Manicouagan Reservoir. This reservoir is held back by the Barrage Daniel-Johnson, the world’s largest multiple arch-and-buttress dam. The artificial sea fills the basin of the world’s second-largest post-Cambrian meteor impact crater, known as the Eye of Quebec.

The Groulx offer hikers a captivating adventure in the wild. Due to its northern location, isolation and altitude, the Groulx Mountains offer a unique remote wilderness experience. Weather changes rapidly here and the temperatures can go down behind the freezing point even in summer. The best time for hiking is in late June and in September to avoid the peak mosquito season.

There are few marked trails, and no nearby rescue service exists, so hiking should only be attempted by experienced wilderness backpackers or in the company of a professional guide. 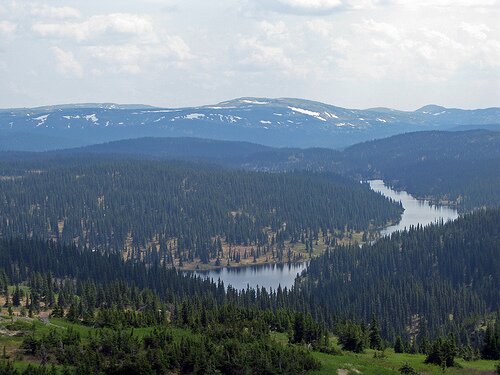 Much of the territory of the mountains is covered in taiga and tundra. Further east, nearly at the end of Route 138, travelers admire mysteriously shaped monoliths in the Mingan Archipelago National Park Reserve of Canada.

The nearest town is Baie-Comeau. Photo of the Groulx Mountains offered by © Mke Jones www.beyondktaadn.org, small team of researchers, mountaineers & naturalists in Québec/Newfoundland/New England dedicated to exploring, studying, and promoting the remote arctic-alpine mountain ranges in these areas.

To find out more: