This park is the largest park in Westmount and it's located at Côte St. Antoine and Murray Street.

King George Park was given its new moniker to mark the British Royal’s visit to Canada with his wife, Queen Elizabeth, in 1939, but it is still called affectionately by locals by its earlier name of Murray Park (or Murray Hill Park) after William Murray, owner of a farmland on this site in the early 20th Century.

At the northern limit of the park’s fourteen acre or 611, 748 square feet expanse is an immense playing field where lacrosse is played, along with rugby and soccer. In winter, the King George Park is home to an outdoor rink for skating enthusiasts.

In its central area are located a dog run, four tennis court area, a wading pool, a basketball net, as well as the comfort station, designed by Westmount architect, Robert Findlay and his son Frank who were commissioned by the City of Westmount to design the pavilion in 1936. The stone structure is classical in style, and houses men’s and women’s changing rooms and washrooms. Steps rise from the lot for toddlers on the park’s eastern edge, and a water pond nestles at the base of the great stone wall.

A rumor has that beneath the King George Park’s rolling slopes lie fresh water wells sacred to the native people who first inhabited the area, along with some of their graves. 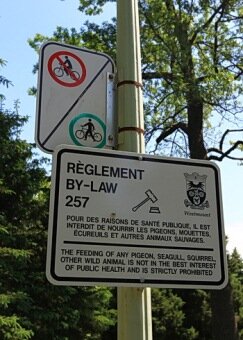 The feeding of any pigeon, seagull, squirrel, other wild animal is not in the best interest of public health and is strictly prohibited. Photo: © Provincequebec

Don’t forget that feeding wildlife is illegal in Westmount and the town has municipal legislation that prohibits the feeding of wild animals (By-law 257) to prevent problems such as those outlined below, because feeding wildlife is a kind gesture, but it hurts more than it helps :

People enjoy feeding wildlife because it brings them in close contact with nature. They also believe that by providing wild animals with an alternate food source, they are helping them survive. Unfortunately, feeding wildlife hurts these animals more that it helps. In fact, feeding wildlife diminishes their foraging skills and this puts their survival at risk when the alternate source of food is no longer available. Besides, in some instances, certain types of food left for wild animals can cause disease or injury.

Natural food sources are plentiful in the King George Park and provide better nutrition than food intended for human consumption. 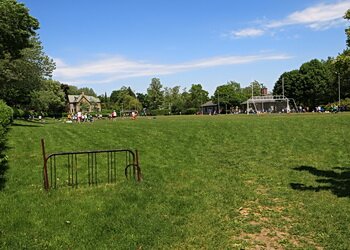 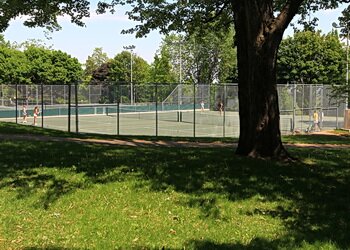