Westmount is a wealthy residential area. It lies within walking distance of the downtown core of the City of Montreal, yet retains an air of tranquility and small-town community.

Westmount contains schools, an arena, a pool, a public library and a number of parks, including Westmount Park and King George Park (also known as Murray Park or Murray Hill Park).

The first occupation on the site by the French was the establishment by the Seminary of St. Sulpice in 1684, of the Fort Des Messieurs, the extensive establishment of which the two early towers and some walls at the College de Montreal are the remnant (the buildings are not within the actual limits of Westmount).

During the earlier years of the 18th century, concessions of farm land running in strips up to and across the top of Westmount Mountain were made to various French settlers by the Seminary. Such was the origin of the old farms now divided into lots and covered with houses.

The first house was the quaint stone cottage of the St. Germain family, overlooking Lansdowne Avenue from above the Cote St. Antoine Road. The Murray farm on the east, between Belmont and Murray Avenues, contained a similar cottage belonging to the Leducs, who owned the farm up to 1847. Traces of their dwelling can still be seen. In those days two roads partly traversed the locality from east to west - the earliest of which was “the Road through the Woods” to Lachine, or Upper Lachine Road, the other the Cote St. Antoine Road.

For two generations after the Conquest (in 1760) there was very little change in the rural countryside of old Cote St. Antoine. Several of the old North West Fur Merchants established country seats here - such as William Hallowell and John Clarke. In later times William Bowman, William Murray, Hon. John Young and Dr. Selby bought old farms and built country seats, some of which their descendants still enjoy.

In 1890 the village having made some progress as a residential suburb and attained the vast population of 1850 was incorporated as a Town under the name of The Town of Cote St. Antoine. In 1893 Sherbrooke Street was opened across the place and became at once the principal thoroughfare. In 1894 the Town was reached by electric railway which brought about striking changes in its outlook and general spirit.

By 1902 the population had reached 10,000, all the principal streets were opened and controlled by building restriction lines and provided with the best of obtainable pavements and sidewalks, a successful lighting plant was erected, a large public meeting hall, parks, a filtered water system and the first civic public library in the Province of Quebec.

In 2002, as part of the 2002–2006 municipal reorganization of Montreal, Westmount was merged into the city of Montreal and became a borough. However, after a 2004 referendum, it was re-constituted as an independent city on January 1, 2006.

Nevertheless, it remains part of the urban agglomeration of Montreal and the bulk of its municipal taxes go to the Agglomeration Council, which oversees activities common to all municipalities on the Island of Montreal, such as fire protection, or public transit, even after the demerger.

Traditionally, the community of Westmount was an enclave of wealthy anglophones of British ancestry, having been at one point the richest community in Canada. This made the city one of several symbolic targets of FLQ terrorist bombings in the 1960s, culminating in the 1970 October Crisis.

However, it is now mostly inhabited by middle and upper-middle class families of multiple ethnic and linguistic backgrounds with the stereotype only partially existing at the very top of the mountain, around Summit Circle, a road which rings around its summit (one of the three peaks of Mount Royal), and on which some of Montreal's wealthiest families (including the Bronfmans and the Molsons) have built their homes as well as select avenues located off The Boulevard. 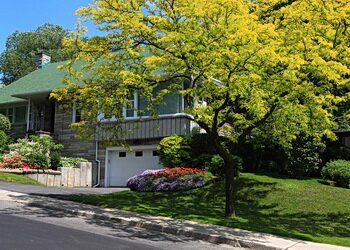 The city is roughly 4 km sq., and occupies an area on the south face of the southern peak of Mount Royal. Image: © ProvinceQuebec.com 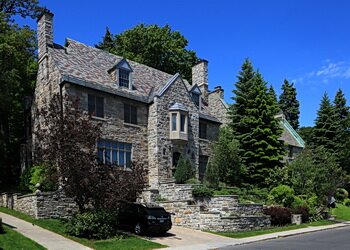 The city, most of which is on steep terrain, extends from the summit to the end of the narrow plateau at the foot of the mountain. Image: © ProvinceQuebec.com

Most of the city of Westmount is residential. Homes increase in size and value toward the top of the mountain, with the largest and most expensive being on or near Summit Circle. Image: © ProvinceQuebec.com 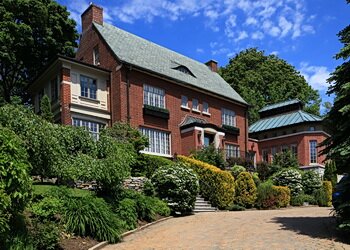 Since regaining its status as a city in 2006, Westmount is governed by a City Council made up of a mayor and eight "district" councillors. In addition to the local city council, Westmount is represented by its mayor on the Montreal Agglomeration Council. Image: © ProvinceQuebec.com

There are several small commercial districts on Sherbrooke Street from the city's western boundary to the intersection of Sherbrooke Street and Victoria Avenue ("Victoria Village"), on Saint Catherine Street across from Place Alexis Nihon, on Greene Avenue and on De Maisonneuve Boulevard near the Atwater metro station. Image: © ProvinceQuebec.com

Note that Westmount Adjacent is term applied by realtors to a district in the borough of Côte-des-Neiges–Notre-Dame-de-Grâce, located in between the city of Westmount, the Décarie Expressway, De Maisonneuve Boulevard and the lands of Villa Maria private Catholic girls school. Image: © ProvinceQuebec.com

The Westmount Park is located between Sherbrooke Street and de Maisonneuve Avenue to the north and south, and Melville and Lansdowne Avenue to the east and west. This park is the second largest in Westmount, after the King George Park. A serpentine waterway flows gently beneath aged willows and past shady benches. Image: © ProvinceQuebec.com 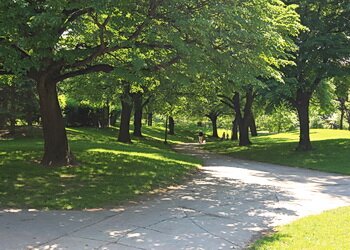 The central area of Westmount Park contains an extensive playground, foot paths, ponds and wading pools, as well as tennis courts. Westmount Library, built in 1897, Victoria Hall, and a large greenhouse are located on its north side. Image: © ProvinceQuebec.com 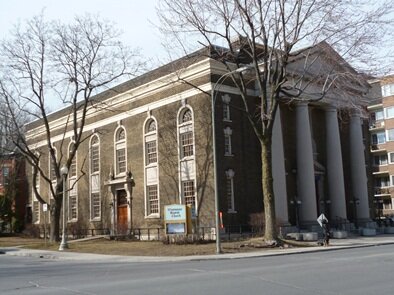