Nestled between the forested hills of the Gatineau Park, in a postcard-perfect setting in the Outaouais Region of Quebec, on the western shore of the Gatineau River and at the confluence of the Peche River, the village of Wakefield possesses a friendly and funky atmosphere created by its diverse residents and nurtured by its surroundings. This peaceful utopia is a mere twenty minute drive from downtown Ottawa, driving north on Autoroute 5 and Route 105 at Route 366.

The village founded in 1830 by Irish, Scottish and English immigrants and named after the town of Wakefield in West Yorkshire, England, is the southern edge of the municipality of La Pêche. With its ideal setting on a river, Wakefield grew thanks to the lumber industry, whose history one can visit at the Wakefield Mill, now restored into an award-winning four-star inn complete with fine dining and spa facilities. With a working blacksmith, candlemaker and of course all the nearby farmers, Wakefield's history is still alive and well.

A spectacular natural setting with fast access to Ottawa and Gatineau, is what makes Wakefield a truly unique and remarkable village. Indeed, whether you're into nature, art, music, outdoor adventure, shopping, or fine food, you'll fall in love with Wakefield.

The village's primary industry is tourism. This picturesque little village of about a thousand people is bursting at the seams with local colour. A bit bohemian in flavour, this tourist destination offers a warm welcome with a variety of cafés, restaurants, pubs, a local farmers market, galleries and boutiques.

Wakefield is a four-season playground: alpine ski hills, the pristine and paddle-friendly Gatineau River, and Gatineau Park, which boasts some of Canada's best snowshoeing and cross country ski trails in winter and beaches, hiking and biking trails in summer, are just a few of nature's attractions in the region.

In addition to a picturesque setting, are the covered bridge spanning the Gatineau River, the Maclaren Mill built in 1838, now restored and operated as the Wakefield Mill Inn and Spa and the Black Sheep Inn (or Auberge Mouton Noir, as its sign reads to conform with Quebec language laws.) The village also provides an access point to Gatineau Park at Lac Philippe.

And of course there is the famous Steam Train of Wakefield whose locomotive and whistle delight kids and adults alike.

Besides, Wakefield is known for its eclectic and lively arts scene.  A home to many visual artists seeking inspiration in a tranquil rural setting, Wakefield gets put on the map again and again by the famed Black Sheep Inn, a juke joint that has hosted a diverse international collection of talent and launched the careers of musicians like alt country diva Kathleen Edwards. And then there are the many festivals: Piggy Back Fringe theatre festival, Native Harvest Festival, Wakefest arts festival, Artists in their Environment Studio Tour, the Gatineau River Festival, and Dragonfest (Wakefield's annual winter carnival), are just a few.

Those who visit this unique small town succumb to its charm and stay. Tommy Douglas, the "father of Canadian medicare", had his home here and Lester B. Pearson, winner of the Nobel Peace Prize, is buried in the MacLaren cemetery.

Note than on a per capita basis, the arts scene in Wakefield is bigger than New York or Paris. This little village of about a thousand people boasts two live music bars, about eight concerts per week, a theatre company, several art galleries, and is home to dozens of budding artists and musicians.

Recreational activities in and around the village include horseback riding, skiing, snowmobiling, dog sledding, golf, canoeing, and kayaking. Wakefield is also known for having the highest bungee jump in the Americas at 61 metres (200 feet).

Many young families settle in the area, enjoying the lifestyle, services and resources of the area. Many artists live in the surrounding mountains and valleys. Public buildings include a hospital, elementary school, police station and library. A weekly regional newspaper, The Low Down to Hull and Back News is also published in the village. 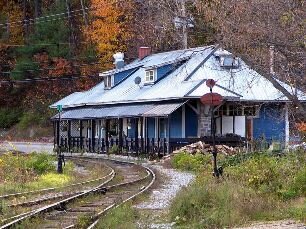