Tadoussac is the oldest village in Canada, founded in 1600. In fact Tadoussac is a small village surrounded by hills and huge dunes, and located on the wooded and rocky coasts of the St. Lawrence River and the Saguenay Fjord.

The village charms visitors with its old houses, a lovely lake and with many activities for tourists. Its permanent population is of about 900. The charming beauty of the Bay of Tadoussac made it the first North’ America’s official member of the Select Club of the World's Thirty Most Beautiful Bays. “Tadoussak” is a word of Montagnais origin, and it would mean "udder".

Tadoussac occupies a special place in Canadian history. Jacques Cartier was captivated by the beauty of the bay during his second trip to Canada in 1535. It was here, that Pierre de Chauvin and Samuel de Champlain wrote the first pages of European settlement in Canada. Besides, Tadoussac was the site of the first official French fur trading post in Canada in the 17th century. Later, Tadoussac has been one of the Canadian oldest resorts. In 1866, the Tadoussac and Sea Beathing Co. built the first red roof hotel in Tadoussac, which shines today like a beckoning light. Year and after year, the village welcomes some 300,000 visitors fascinated by the beauty of this natural site. The fresh water from the Saguenay and the warmer, salty water of the St. Lawrence, meet here to create a rich marine environment, including an abundance of krill, making the area very attractive to whales. Thus, the village is known as a tourist destination, mostly because of its facilities for whale watching and because of the rugged beauty of the Saguenay fjord.

Note than Tadoussac is the east terminus of the Baie-Sainte-Catherine - Tadoussac ferry. The ferry offers frequent service across the Saguenay River. It is part of Quebec Route 138. The Old chapel of Tadoussac is the oldest wooden church in North America. Tourists can also drop by the Center of Marine Mammal Interpretation For an extended journey or a short stay, whether you are a nature lover, a whale watcher, a music fan, a history buff or fine gourmet, you will spend some memorable moments here.

The surrounding area is either rural or still in a wilderness state. A few national and provincial natural parks and preserves compete for prestigious spots, such as the first marine national park of Canada. The nearest city is Saguenay located about 65 miles west. 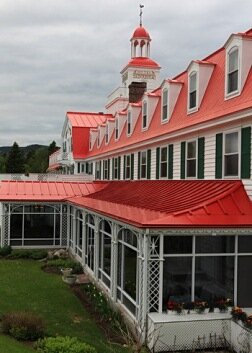 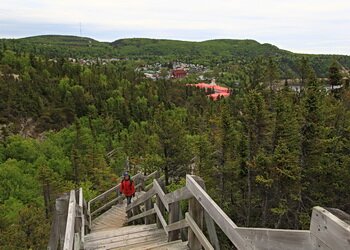 Paths of Tadoussac. The Saguenay Fjord has a particular geographical environment. Although it is not under arctic influence, it has the climate of a northern region with its astonishing temperature variations. Photo by © V. Petrovsky