Harrington is a township municipality in the Laurentian (Laurentides) Region of Quebec, part of the Argenteuil Regional County Municipality. The township is located in the Laurentian Mountains, about 40 kilometers (25 mi) north-west of Lachute. Its population is of about 800.

Harrington is a land of lakes and rivers, stocked with abundant fish. The Rouge River is the main river flowing through its territory, and the largest lakes include Big McDonald Lake, Green Lake, and Harrington Lake, each attracting a large number summer cottage vacationers.

The territory has a characteristic appearance of the Laurentian region with dense mixed  forests.

Harrington Township first appeared on the Gale and Duberger Map of 1795, but the township was settled in 1830 by a group of Scottish immigrants. In 1841, the township was officially established. Around 1849, a group of colonists originating from Glenelg, Scotland, founded the village of Lost River after the river which flows through the territory are thus named as several miles from its source the river disappears beneath a calcareous rock  dividing the waters of Gate and Fraser Lakes.

In 1855, the Harrington township municipality was formed. The name of Harrington may be attributed to a county in England. The local post office was identified under the name of Rivington between 1878 and 1961.

Today most people here speak English in their families (about 60%).

Harrington is home to the Buddhist Monastery of Tam Bao Son. 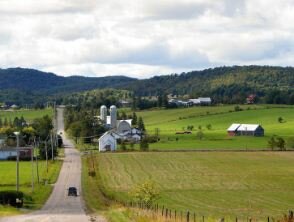