Nestled in a rich apple-growing valley on the Pike River and at the foot of Mount Pinacle and the American border, Frelighsburg is home to a well-preserved architectural heritage in a superb natural setting. Frelighsburg (population of about 1100) is considered one of the most beautiful villages in Québec.

Originally occupied by native Abenakis, Frelighsburg was settled in the late 1790s by American Loyalists, including Abram Freligh a physician of German origin who moved from New York State. Till today, the mill built by his son in 1839, along with several other historic 19th century buildings, is considered historic monuments.

In 1866 and 1870, the town was the setting of two uprisings led by the Fenians, a group of Irish immigrants to the United States, who tried to blackmail England into granting independence to their homeland by holding Lower Canada captive.

Other attractions of Frelighsburg are the old presbytery (1887), the convent (1914) and the former home of Joseph Lansberg, which today serves as a café-restaurant specializing in maple syrup products. 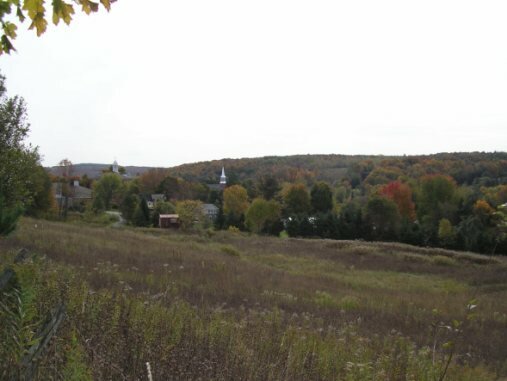 Frelighsburg is surrounded by apple orchards, and stretches all the way to the base of Mount Pinacle, which offers dazzling blossom views in the springtime.

The cultivation of apple trees began by the end of the 1920s, and some were even grown on the property of former Quebec premier, Adelard Godbout. This property is known today as the Trois-Ruisseaux Farm. Frelighsburg can be seen by car along a number of scenic roads: Chemin Eccles Hill (which winds up alongside the river), Chemin Saint-Armand (which is lined by trees and dotted with farms, orchards and wooded parks), Chemin du Verger, and Chemin Richford, a panoramic road through the orchards that offers views of the Appalachian Mountains.

This Bed & Breakfast offers rooms with their own bathroom:

Photo of the region offered by Au Chant de l’Onde Bed and Breakfast.