Lévis is a rather big city, located on the south shore of the St. Lawrence River. It lies opposite Quebec City, and it’s linked to Quebec by a ferry, and two bridges: the Quebec Bridge and the Pierre-Laporte Bridge. The population of Lévis is of about 140,000.

The city of Lévis covers an area of 444 km2, with 10% urban territories, 48% farmlands, 36% forests and 6% wetlands. The Etchemin River and the Chaudière River run through Levis. The Chaudière River boasts a fall with a suspended bridge, a popular tourist destination, which can be accessed from Highway 73 (autoroute 73).

On January 1, 2002, ten communities were merged to form the new city of Lévis (the former communities of Lauzon and Saint-David-de-l'Auberivière had been merged to Lévis in 1989). The new city has been divided into three boroughs: Desjardins, Les Chutes-de-la-Chaudière-Ouest and Les Chutes-de-la-Chaudière-Est. The ten former municipalities have become districts (secteurs) and each of the three boroughs is composed of either three or four districts. The former communites which form today the city of Lévis are as follows: Lévis, Charny, Pintendre, Sainte-Hélène-de-Breakeyville, Saint-Étienne-de-Lauzon, Saint-Jean-Chrysostome, Saint-Joseph-de-la-Pointe-de-Lévy, Saint-Nicolas, Saint-Romuald and Saint-Rédempteur.

First Nations people have favored the Pointe-Lévy area long before French settlement due to its ideal location, at the junction of the St-Lawrence and the Chaudière rivers. Many archeological sites reveal evidence of human occupation for thousands of years.

In 1636 the seignory of Lauzon was founded on the eastern part of the actual territory of Lévis by the French and in the following years other seignories were founded near the St-Lawrence River. However, the Lauzon seignory remained unoccupied until 1647, when Guillaume Couture became the first European settler installed there.

During the Seven Years' War in the summer of 1759, Britosh general James Wolfe established a camp in the territory of Pointe-Lévy and laid siege to Quebec City. The British fired cannons from the hills of Pointe-Lévy for three months. Then they attacked the capital of New France and Quebec fell to the British. During the siege, Pointe-Lévy served as the main camp to sustain the British army.

From 1854, the railroad appeared in Pointe-Lévy making the city a major transportation centre for commerce and immigration as it could be connected through rail to Ontario, Maine (and from there the whole United States) and the Maritime Provinces.

Between 1865 and 1872, a series of three forts were built to protect Quebec and the surroundings from the threat of American invasion. The forts were never used for their intended purpose. Fort no.1 still remains today and can be visited.

The City of Lévis was incorporated in 1861 Many municipalities in the territory of present-day Lévis were merged between 1861 and 2002 since then.

In the late 19th and beginning of the 20th century, Alphonse Desjardins, who lived in Lévis, pioneered the foundation of the credit union movement in Quebec and founded the first “caisse populaire” in Lévis. He began a long process to create what later became the Desjardins Group by travelling everywhere in Quebec helping people in other cities to start their own credit union.

Lévis is an old community in terms of population as the proportion of youths is lower than the national average and the proportion of those over 65 years of age is higher than the national average. Some 15% is under 14 years of age, while those over 65 number 16%. Around 99 per cent of the population are of European ancestry, while over 97% of residents speak French as their mother tongue.

Lévis is not a typical suburb. Indeed, the presence of several large employers has allowed many citizens to both live and work here. It is home to the Ultramar refinery, one of the largest in eastern Canada, Frito-Lay and Davie Shipbuilding are located in Lauzon Area. The Desjardins Group and its subsidiary Desjardins Financial Security are headquartered in Lévis. The city is also a major agricultural business research and development center. More and more high technology companies, such as Creaform (3D), are established in Lévis. Beside, the city is home to the enclosed regional shopping mall, Les Galeries Chagnon.

There are many schools of different levels, including the Cégep de Lévis-Lauzon and a UQAR campus (Université du Québec à Rimouski). Many small business and entertainment developed in the city during the last decade and finalized the transformation from a Quebec City suburb into a small city. 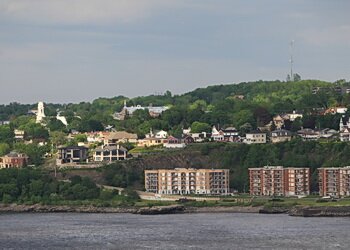 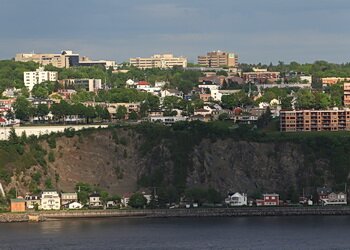 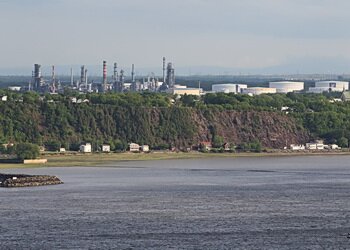