Gore is a township municipality in Quebec, located within the Argenteuil Regional County Municipality, in the Laurentian Mountains. The Township of Gore was founded in 1840. For many years, this small township offering magnificent landscapes had used to be mainly a vacation area, but gradually it has become an excellent place to live on a permanent basis. Our permanent population is increasing and today Gore has about 1700 permanent residents when the seasonal population is estimated at over 3000.

Gore’s territory covers 94 km on the Laurentian Plateau, with the Municipality of Mille-Isles to the north, Wentworth to the west, Saint-Colomban to the east and Lachute to the south. The natural beauty of the township’s rolling terrain and the wealth of lakes and waterways add to the quality of life. The land elevations vary from 168 metres to 427 metres (550 to 1400 feet) above sea level.

You’ll find there many lakes which cover more than 6% of the territory and give the township its exceptional charm. Certain lakes are completely developed. Others are only partially developed or are still in their natural state. Lakes Barron, Hughes, Écho, Kenny, Chevreuil, Aux Oiseaux, Solar, Caroline, Evans, Dawson, Clark, Grace and a part of lake Sir John have become centres for residential development. There are a number of lake associations in the municipality, most of them are concerned with the environment and control of lake pollution.

These diverse features fashion the richness and beauty of an area that has preserved its natural environment while developing as a residential and recreational treasure to be discovered.

Gore is less than one hour drive from Montreal. 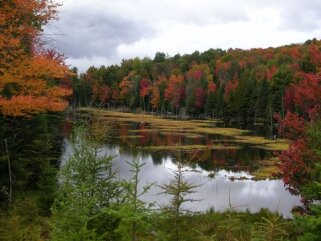