Located in the centre of the island of Montreal, Town of Mount Royal has a surface area of 7.43 square kilometres and a population of about 20 thousand.

Accessible by major highways, at the nexus of the main east-west Autoroutes 20 and 40 and north-south Autoroutes 15 and 13 highways, Mount Royal will surprise visiting drivers with its web of winding streets even as it charms them with its succession of delightful green spaces and magnificent homes.

Town of Mount Royal was created on the initiative of the Canadian Northern Railway, which wanted to build a “model city” on the north side of Mount Royal. It was Frederick Gage Todd (1876–1948), considered Canada’s first landscape architect, who developed the plans. (The first town in Canada built according to the similar plan was Goderich, Ontario, founded by the Canada Company in the 1820s had interesting town planning. It was laid out in a star formation with all streets radiating from a central square).

The Town was incorporated on December 21, 1912. Its residential development was begun in 1910 under the guidance of the owners of the Canadian Northern Railway, Sir William Mackenzie and Sir Donald Mann, and CNR’s chief engineer, Henry K. Wicksteed.

From the start, the Town was laid out along lines similar to those of Washington, D.C., with two main boulevards crossing diagonally through a central green space. In the early days, home building took place concurrently with the construction of the tunnel under Mount Royal, which would provide a direct rail link between the new Town and downtown Montreal. To avoid speculation, the project leaders were forced to exercise the greatest discretion, entrusting an intermediary with the job of acquiring the land needed to realize the project. The tunnel was built in April 1917, when a special train carrying workers and guests inaugurated the tunnel. The first passenger train rolled through the tunnel on October 21, 1918; tickets cost 25 cents apiece. Once the 5.3-km tunnel connected Town of Mount Royal to downtown Montreal, property values in the Town rose significantly. Several street names still bear witness to the close ties that existed between the Town and the railway, most notably Canora Road, made from the first two letters of the words Canadian Northern Railway, and Wicksteed Avenue, named in honour of chief engineer Henry K. Wicksteed.

In the beginning, the Town was a small farming community, known for its melons. The Daoust family farm grew the celebrated Montreal melon, also called the Montreal nutmeg melon. Green-fleshed and uniquely flavourful, the melons weighed up to 9 or 11 kg. So special was the Montreal melon that it was exported to New York, Chicago and Boston, where, in 1921, people paid as much as $1.50 a slice to taste it. Farming was abandoned over the years, with the gradual urbanization of the Town.

The first schools and churches were built in the 1920s and shops began to open soon after. The present Town Hall was inaugurated in 1948 by Mayor Richard Earle Schofield.

The Town entered its main growth phase in the 1950s. Companies began to invest in the industrial sector. The Metropolitan Expressway and Laurentian Autoroute replaced Côte-de-Liesse Road as the major local highways. Residential construction began on the site of the former golf course, and Jean-Talon Street was extended between Côte-des Neiges and Canora Roads.

To the existing Town buildings were added the police and fire station on Roosevelt Avenue. In 1952, the Town library and curling club opened their doors. Over the course of the decade, three new schools were built: Mount Royal High School on Montgomery Avenue, École primaire Saint-Clément on Laird Boulevard, and École supérieure Mont-Royal on Rockland Road. Reginald J. P. Dawson, first elected mayor in 1951, set a record by remaining in office for slightly more than 36 years.

In 1966, the Rockland Overpass was constructed, linking Town of Mount Royal and Outremont. In the same year, the old recreation centre was demolished to make way for a new one. In 1967, the present library on Graham Boulevard was built.

Town of Mount Royal is renowned for the abundance of greenery that graces its residential neighbourhoods. All along its streets and in its parks and raised medians, flowerbeds make a spectacular display. In fact, the town has 30 parks and nearly 70 other green spaces. Nearly ten thousand trees raise their branches toward the sun and in summer, about 200 flowerpots are distributed throughout the Town. And that is not taking into account Town residents’ exceptional landscaping work on their own properties, year in and year out.

Public Works’ horticulture specialists use totally organic gardening methods and we are proud to have begun moving toward ecological management of our parks and green spaces as far back as the mid-1980s.

Shoppers will find much to tempt them under a single roof at the chic Rockland Centre.

Besides relying on your car, you can travel to Town of Mount Royal by taking Société de Transport de Montréal (STM) buses 16, 165 and 535 or riding the metro to L’Acadie (on the east end) or Namur stations (on the west end), both of which are located just outside the town limits.

Besides, the Agence métropolitaine de transport (AMT) has two stops on its Deux-Montagnes suburban train line (Mont-Royal and Canora stations) that take you between Town Centre and downtown Montreal in less than 10 minutes. 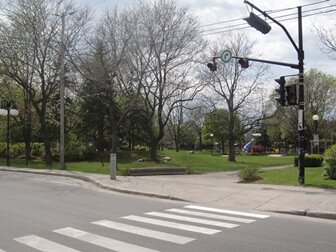 Town of Mont-Royal. Monsignor Harold-J.-Doran Park. Harold J. Doran (1901-1966), born in Montreal, is the founding priest of the Parish of the Annociation. Ordained as a priest in 1926, he was raised to the rank of monsignor by Cardinal Leger. Photo : © ProvinceQuebec 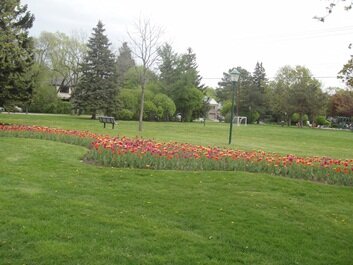 Thomas-S.-Darling Park. Thomas Stephen Darling (1881-1952) was Town of Mount Royal’s first mayor from 1913 to 1934. Born in Detroit, he joined the Canadian Northern Railway in 1907. He arrived in Montreal in 1911 with a mandate to establish Model City, a project linked to the tunnel under Mount Royal. On behalf of the Canadian Northern Montreal Land Co, he bought all land necessary for the development of this new urban centre. Photo : © ProvinceQuebec 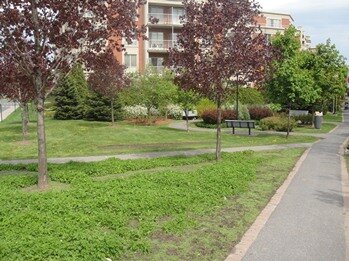 Park Wicksteed. A suggestion made by Carlyle School student Jenosan Annamali on Earth Day 2009 inspired the name of this park. Henry King Wicksteed (1855-1927) was the engineer responsible for the construction of the Mount Royal tunnel. Photo : © ProvinceQuebec 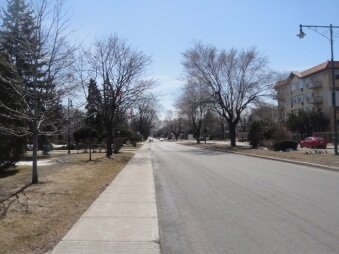 A view of the town in the early spring. Photo : © ProvinceQuebec 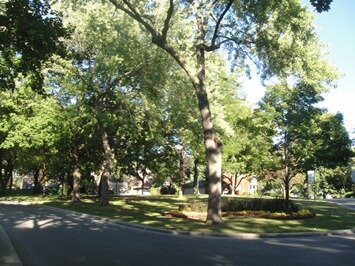 Emerald Park, on Saint-Clare Road. A poetic name for Ireland, evoking the greenness of the pastures and woods of Emerald Isle, the country of Harold H. Little’s wife’s ancestors. Mr. Little was a resident of Stanstead Avenue. Photo : © ProvinceQuebec 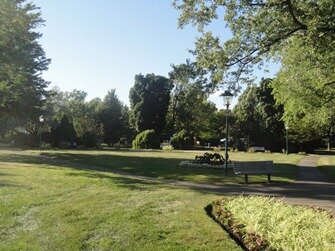 Dakin Park at Saint-Clare Road and Morrisson Avenue.  John A. Dakin was Town of Mount Royal’s fourth mayor, from 1935 à 1937. A contractor by profession, he owned Dakin Construction Co. Ltd and built many houses in the Town. Photo: © ProvinceQuebec 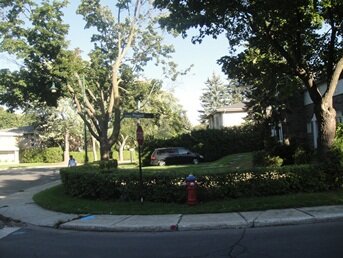 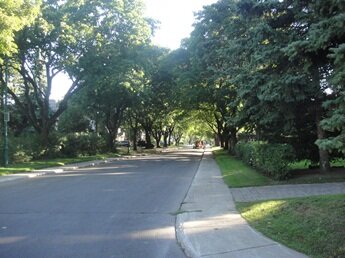 Douglas-et-Harold-Towle Park. Corner of Glengarry Avenue et Road Saint-Clare. Edward Douglas MacAlpine Towle (1871-1955), the first surveyor of Model City, settled in the Town of Mount-Royal in the spring of 1914. He was succeeded by his son Harold (1912-1995). Photo by © ProvinceQuebec 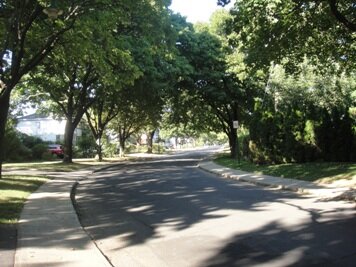 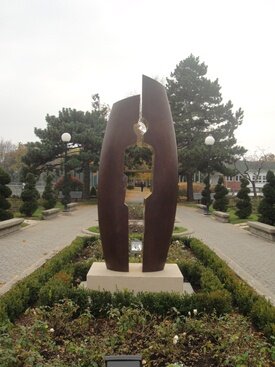 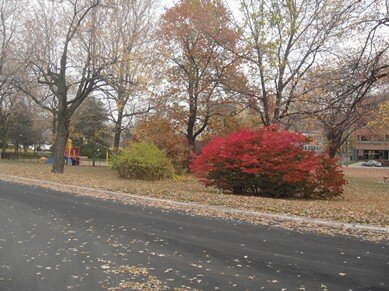 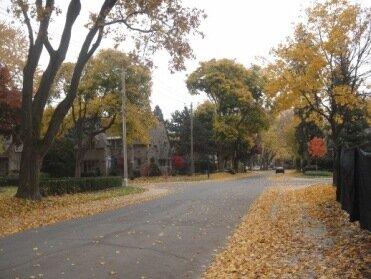 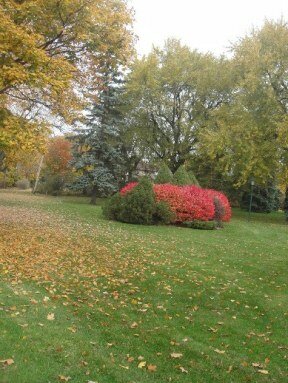