Located on the point of the Gaspe Peninsula, the town of Perce (3500 inhabitants), has become a well-known holiday destination, as well as a source of inspiration for many artists thanks to its magnificent surroundings, its maritime heritage, and its famous Rock Perce.

Historically, Perce was part of a vast territory where members of the Micmaq nation lived throughout the centuries. Basque whalers visited the coast long before the French navigator Jacques Cartier landed here in 1534. The first five European colonists settled in the Seigneury of Perce in 1672.

They were recruited by Pierre Denys, the first official owner of the land. Two Catholic priests established their mission at the same time, and they took it upon themselves to evangelize the Micmaq. Those seven people were the first permanent European settlers of Perce. During the fishing season, however, nearly 600 European fishermen, as well as many natives, used to come here to trade and barter for goods.

Curiously enough, this seasonal influx of inhabitants created a nice opportunity for the British to take over the area.

In 1690, two English ships disguised as French vessels took over the village and burned-down all the buildings, including the chapels. All the inhabitants and fishermen had to flee into the woods, and the village was abandoned for a long time. 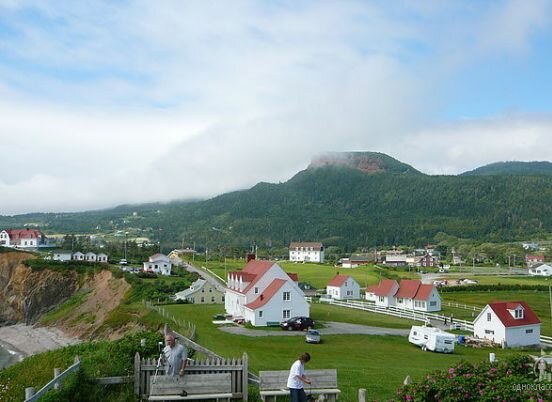 Perce was reborn after the fall of the French regime in 1760.

A new fishing post was built, and fishermen from Jersey, Ireland, and New England arrived. In the wake of the 20th century, the first tourists, fascinated by the Perce Rock, appeared here in search of exotic adventures. Today’s village is stretched along the coastline sculpted by capes, such as Pic de l’Aurore, Mont-Joli, Trois-Soeurs, as well as cliffs and coves. Behind the magnificent St. Michael’s Church of Perce, walking trails lead up past panoramic lookouts to the summit of Mont Saint-Anne of 348 meters (1,175 ft), the Grotto, and the Crevasse.

Another high hill, Mont-Blanc, offers a spectacular view of the region. In the coastal waters, visitors can observe various species of marine mammals, such as seals and whales. The region is home to thousands of marine birds, which crowd the rocks of the Parc national de l’Ile-Bonaventure-et-du-Rocher-Perce facing of the town, just 2 miles off the coast of Perce. Perce offers an original architectural heritage: a blend of ancestral buildings. A few kilometers west of the town lies Anse-a-Beaufils, a typical port, with its small fishing boats and historical general store.

Over the years, the town of Perce, the tourism capital of the Gaspe region, has acquired an enviable position in Quebec: its magnificent landscapes and the diversity of its activities lure adepts of ecotourism and admirers of art and culture.