The small Town of Hampstead (population of about 7 thousand, area of 1,75 square km), bordering on the City of Côte St. Luc, Notre-Dame-de-Grace, and the City of Montreal, is well-known for its distinctive homes, beautiful parks, abundance of greenery, and the overall tranquility that surrounds this oasis of peace and quiet.

Located only fifteen minutes from downtown Montreal, Hampstead has never deviated from the high standards imposed by that original plan. The founders of the Town of Hampstead envisioned a community where residents could be safeguarded from the chaotic mixture of residential, commercial and industrial zoning. To this day, the Town's executive council considers each choice to be an existential matter, and treats each decision accordingly.

The area chosen by the founders, in 1914, was an undeveloped plot of land, mostly covered by forests. Access was limited by the fact that only Queen Mary road served the area, which was out of the reach of the existing public transportation system. At the time, the area was not served by public services and had no infrastructures like sewage, water, lighting, sidewalks etc. Therefore, any development depended in large part on the availability of funds and a good deal of initiative.

The original vision was laid out in a plan adopted by the provision council on 1913-1914. The plan was based on a model for development that became popular towards the end of the 19th century.

This model was known as the "Garden City" concept which is a conceptual framework that aims at establishing an idyllic suburb community. The plan offers residents some of the amenities of country living, by giving each family an individual home surrounded by ample green-space. Those interested in gardening, for example, could grow vegetables while still being able to devote some land to decorative gardening. This rural-oriented movement was a reaction to the overcrowded and unpleasant tenement areas, characteristic of the post-industrial city. Urban planners slowly moved toward more rural-based concepts, creating what came to be known as the Garden City trend.

The founders of the Town of Hampstead took the Garden City model one step further, and as Hampstead's name suggests, the original planners of the Town were influenced by developments in the north section of London. Indeed, each house was assigned a generous-sized lot, with room for a maximum amount of trees, shrubs and green-space. Particular attention was also paid to the curving of the Town's roads, as opposed to the usual grid-iron design, and to the strategic planning of its trees. The unique design adopted by the founders has had the effect of through traffic, while further distinguishing the appearance of the Town.

However, by 1920, there were only eight buildings erected in the Town. In fact, for a few years the Town did not even have its own building by-laws, depending instead on those of the City of Westmount.

Nevertheless, by-law 16, passed in 1923, created very strict building standards. In order to ensure that these standards were met, the Town appointed a building inspector. In 1926, Council passed an amendment to the building by-law, establishing an Architectural Advisory Board. The board's mandate is to ensure that the distinct character of the Town is maintained. It has proved to be an effective tool, with a spotless record. Even in times of slow growth, it remained one of the keys to Hampstead's development as a high-class residential community.

In 1925, before the building restrictions were even amended, the Town built a one-storey school building on Merton road. By 1928, the building was renovated to add a second storey. In 1937 a three-storey wing was added. And finally, in 1946, the Town made further improvements on the building that has served, until this day, as its only school. The Town's fire station was built in the 1920's. At that point, Hampstead also began offering rudimentary policing services. By 1934, the Town had two police constables patrolling either on foot or by bicycle; their presence ensured safety and a low crime rate.

As for religious institutions, the Town's needs were fairly limited. At the time, the majority of Hampstead residents were mostly protestants. Town officials allowed for the construction of the Queen Mary United Church, in 1931 to serve their needs. Soon after, St. Malachy's Church was built, on MacDonald Road, to accommodate the Town's Catholic population.

As the demographics of the Town shifted over the years, the Town always adapted to suite the needs of its residents. Eventually the St. Mathew's Anglican Church, the First Baptist Church, the Reconstructionist Synagogue and finally the Adath Israel Congregation were added to Hampstead's list of religious institutions. Such changes reflected the massive changes in population experienced by the Town over the second half of the century.

An Israeli town of Kiryat Shemonah is Hampstead's twin town since September 1978. 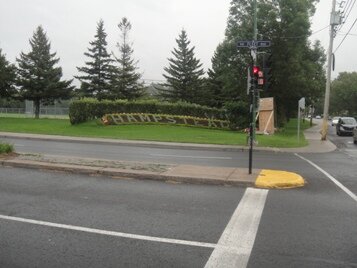 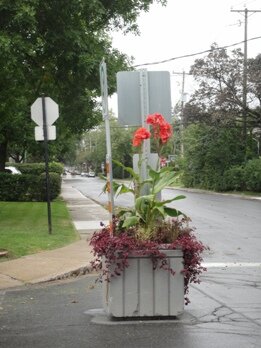 It seems, its corner of Bourret Avenue and Finchley Street. Photo : © ProvinceQuebec 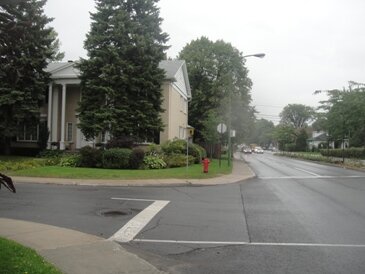 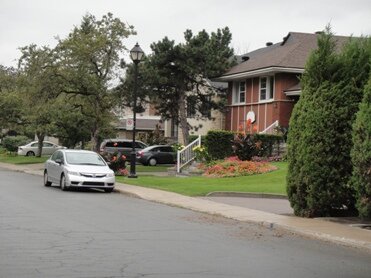 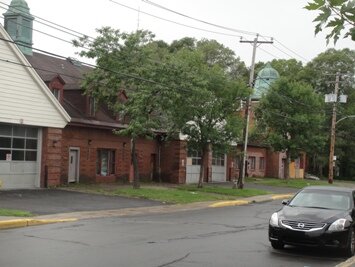