Bonsai is an ancient Japanese horticultural art form. The word Bonsai means tree-in- a-pot. Originally developed 2000 years ago, the sublime art of bonsai is practiced throughout the world and shape-harmony-proportion-scale are all weighed carefully as art, and the human hand combines this in a common cause with nature.

Bonsai are kept small by careful control of the plant's growing conditions. Only branches important to the bonsai's overall design are allowed to remain and unwanted growth is pruned away. Roots are confined to a pot and are periodically clipped. In fact, a tree planted in a small pot is not a bonsai until it has been pruned, shaped, and trained into the desired shape. The appearance of old age of a plant is much prized and bonsai may live to be hundreds of years old.

The living bonsai will change from season to season and from year to year requiring pruning and training throughout its lifetime. There are many varieties of plants that do well as an indoor bonsai such as ficus, aralia, azalea norfolk pine, serissa, gardenia, or boxwood. These are all woody-stemmed plants and can have their limbs wired to direct the growth.

There is also a wide choice of trees for outside bonsai. In northern climates, such in Quebec, winter protection from freeze-drying winds is necessary. Trees should be kept in anunheated area. An unheated garage, shed, breezeway, or cold frame can provide this. The practice of bonsai is sometimes confused with dwarfing, but dwarfing more accurately refers to research and creation of plant cultivars that are permanent, genetic miniatures of existing species. Bonsai does not require genetically dwarfed trees, but rather depends on growing small trees from regular stock and seeds.

In Montreal, since 1989, thanks to the generosity and friendship of the Nippon Bonsai Association Inc. from Japan, the Bonsai Garden, part of Montreal Botanical Garden, harbours a collection of rare beauty. For a number of years, the members of the Japanese Bonsai Society lovingly cultivated and protected the bonsai they donated to the Montreal Botanical Garden. The plants reflect the very heart of the Japanese people. The crossed the ocean and the continent between Japan and Quebec, and now Montreal Garden cherishes them as the symbol of the friendship between Canada and Japan.

Carefully preserved and maintained for many generations, these miniature trees, varying in age from 25 to 350 years, bear the heart of the Japanese people and evoke the friendship that unites Canada and Japan. From Spring to Fall, visitors may admire specimens of Japanese maples, of the Maidenhair tree, and many junipers and azaleas. 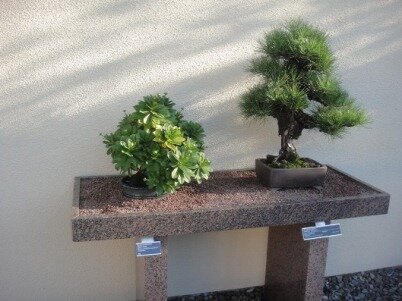