Jean Drapeau Park (Parc Jean-Drapeau) is one of the most well known parks in the Montreal area. The park encompasses two islands - Sainte-Helen Island, named in honour of Hélène Boullé, the young wife of Samuel de Champlain, and Notre-Dame Island, entirely man-made.

The park is named after Jean Drapeau, the late mayor of Montreal. The dome of the Biosphere and the Levis tower, visible from the Montreal Old Port, are located on the park territory. Both the islands exist in their present form due to work done in preparation for the international world’s fair held here in 1967, EXPO-67. During Expo 67 dozens of pavilions were built on the Notre-Dame Island.

After the event was over, buildings were gradually removed, leaving only the pavilions of France and Quebec, which have been turned into the Montreal Casino. The island now has a man-made beach and various bike paths as well. St. Helene was enlarged for Expo 67 but some of the parkland was preserved. East of the woodsy area, the island was built out to create La Ronde, an amusement park which now belongs to the U.S. chain Six Flags. After Expo 67, most of the pavilions were removed from the western end of the island, but the U.S. pavilion, Buckminster Fuller's biggest geodesic dome, was left as a gift to the city of Montreal.

Today it has been turned into the Biosphere, a museum and study centre about water and ecosystems. There is a large Alexander Calder stabile, Man, dating from Expo 67, and a second large sculpture along the city-side shore and a few other sculptures in various spots in the park. The old military fort houses the David M. Stewart Museum and the Levis tower, dating from the 1930s, which stands on some of the higher ground of the island.

Despite all the installations, St-Helen has some pleasantly idyllic walks that are relatively unfrequented. A summertime favourite of many residents and visitors alike is to zoom around the Circuit Gilles-Villeneuve track on a bike or rollerblades, pretending that you are as fast as the F1 Grand Prix race cars that take it over in June. In winter, you can skate on the former Olympic rowing basin, go tubing, snowshoe or cross-country ski the many trails found in the park.

The park occupies the area of 268 hectares. It’s a unique mix of green space, architecture and history, as well as cherished four-season playground. The park also offers a filtered-water beach, outdoor pools, museums, acres of flower gardens, walking and cycling trails, an outdoor art gallery. To get to the park you can take the metro’s yellow line to metro Jean-Drapeau on St-Helene. 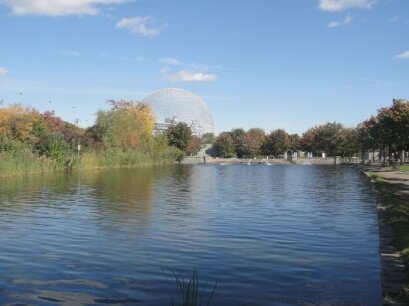 International Rose Garden. Presented by the Rotary Club of Montreal: Lakeshore in Commemoration of the centenary of the Canadian Confederation at the occasion of the universal and international exhibition of 1967. Photo by © ProvinceQuebec.com 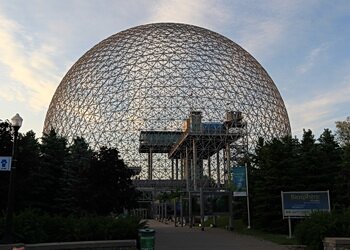