In 1944, the creation of a lodgement in Western Europe, was long held and thought essential to the defeat of Germany. Since 1942, plans had been drawn and redrawn, eventually emerging as Operation Neptunem the assault phase, and Operation Overlord, the invasion itself.

The D-Day, the largest seaborne invasion, involved more than 156,000 troops from the United Kingdom, the United States, Canada and the Forces françaises Libres. Nearly 7,000 vessels of all types would be involved, more than 4,000 of which were landing craft. Approximately 12,000 aircraft would be used in supporting the landings, a task which included attack sorties, the dropping of bombs and the transportation of parachute troops.

The ultimate site chosen for the landing was the Cotentin Caen area of Normandy coast, 350 km to the south-west of the Pas de Calais, where the Germans stood in anticipation, fooled by the Allies’ deception operations.

In 1942, the Germans began to work on the Atlantikwall, an extensive system of coastal fortifications, in anticipation of an attack. Stretching from the border between Spain and France to the northernmost territory of Norway, the wall consisted of barbed wire, mines, bunkers, artillery, mortar pits, machine-gun nests, reinforced-concrete pillboxes and beach obstacles.

The invasion plans called for a wide landing in which five infantry divisions, each dedicated to a specific beach, would wade ashore along an 80-km stretch of the Normandy coast.

Units of the Canadian Army would join with the British Second Army in forming the left side of the assault, while the 1st United States Army would take the right. These units would be preceded by three airborne divisions, including members of the 1st Canadian Parachute Battalion.

Two brigades of the 3rd Canadian Infantry Division where to land in the first wave at Juno Beach (one of the two most heavily fortified beaches targeted in the assault). The Canadians were charged with establishing a beachhead and capturing the three small towns which lay directly behind the beach. Then, they had to advance inland to take position on the high ground west of the city of Caen.

More than 15, 000 Canadians would take part as actual members of the landing force, while the remaining elements of the First Canadian Army would be expected to move in on Normandy in the weeks that followed.

The D-Day Invasion was to have taken place on 5 June 1944, but heavy storms forced a postponement. Rommel himself saw the inclement weather as an opportunity to take a few days’ leave. But in the early hours of 6 June, the first Allied forces reached Normandy. Paratroopers, including 450 Canadians, landed behind the Atlantikwall. They managed to create havoc and confusion within the German ranks. Transportation links were severed and a key bridge was destroyed…

It was just after eight o’clock that the Regina Rifles became the first to land. Their advance on the beach was covered by the tanks of the 1st Hussars. Together, they fought their way off the beach and into a town of Courselles-sur-Mer. By late afternoon, they were able to advance inland.

The Victoria’s Canadian Scottish landed at Mike sector and the Royal Winnipeg Rifles (the Little Black Devils) came under enemy gunfire while still far offshore. Many were killed as they left the landing craft.

The North Shore Regiment suffered heavy losses at the Nan sector and several tanks of the Fort Garry Houses were destroyed. In this sector the Queen’s Own Rifles received the worst battering. Two-thirds of the members of one company were cut down by a German 88-mm gun. A second company had the misfortune of hitting the beach directly opposite a German strongpoint. Half of those who landed were killed.

The Régiment de la Chaudière were not lucky… As their landing craft approached the cost, it struck a concealed mine. As a result, the Quebec regiment had no choice but to abandon their equipment and attempt to swim to shore.

Of all the Canadian units involved in the invasion, only one managed to reach their D-Day objective. Nevertheless, they had left the first line of enemy defences in ruins. As dusk set, the Canadians had advanced farther inland than any other of the invading forces.

The Royal Canadian Air Force was among the first to see action on that day. While Canadian fighter pilots took on the Luftwaffe, the N 6 Bomber Group dropped several thousand tonnes of explosives on coastal defences.

Minesweepers of the Royal Canadian Navy worked to clear the path to Normandy in the English Channel and Canadian destroyers fired their guns to add to the destruction of coastal defences wrought by the air force.

Three hundred and forty Canadians died that day, with another 574 wounded and 47 taken prisoners, but the Canadians, with their British and American allies were able to establish a continuous front, thus the Atlantikwall had been breached. 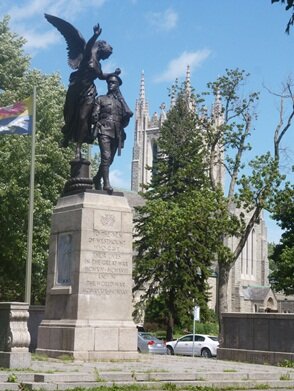