Demographics of the 17th Century

Demographics of the 17th Century

Canadian demographics of the 17th Century

When Jacques Cartier and Roberval had visited the native villages of Stadacona and Hochelaga, they found thousands of Iroquoians who lived there. Later in the century, for reasons that remain obscure to historians and archaeologists, the St. Lawrence Iroquoians practically disappeared.

They may have been destroyed by tribes from farther west. Some historians think they may have been decimated by European diseases brought by Cartier or by Basque fishermen. Some other experts, on the basis of some pottery found in late pre-European Huron sites, speculate that this people were adopted by the Huron.

Whatever the cause, their disappearance meant the French, unlike the British colonists farther to the South, did not have a sedentary local native population when the came here and settled early in the seventeenth century. In order to guarantee the fur supply, the French entered alliances with the Huron who were driven to today’s Quebec area by their Iroquois enemies (don’t confound Iroquoians and Iroquois, which are two distinct nations).

However, tribes in the French alliance felt victim of the diseases, while the Iroquois had no direct contacts with the Europeans and thus survived. In only three years, between 1636 and 1639, the Huron population declined from about 25 000 to 10 000 due to smallpox and influenza.

By the end of the 17th century, the native population in Quebec declined to about 2 thousand, while the number of French settlers increased to 3 thousand.

Canada is the only country in the world that has had a continuous series of birth records for more than three centuries dating from the code of laws issued in Quebec in 1621.

A laborer in Canada in 1644 received as his wages, approximately 30 cents a day, with board. 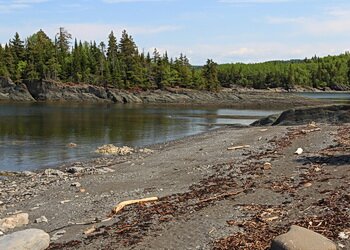 Indian tribes along the Golf of St. Lawrence may have been destroyed by other tribes coming from the West. Image: © ProvinceQuebec.com