There was a vehement reaction in Quebec to the bill to make military service in Canada compulsory.

The French-language press, with the notorious exception of the Conservative newspapers La Patrie and L'Evenement, attacked it.

Anti-conscription leagues were organized through the province, and there were many protest meeting. Even the summer home of the owner of the Montreal Star was dynamited. At the end of August, 1917, the bill was signed by the governor general of Canada and virtual riots break out in Montreal.

There are street fights, broken windows, even shooting. Archbishop Bruchesi, who had demonstrated his unswerving loyalty on the question of Canadian participation in the war, writes to Prime Minister Borden of Canada: The people are aroused. They are liable to commit excesses of all kinds. There is one brawl after another. Killings are to be feared in our cities. In the countryside, the people will not yield. They seem determined to go all the way. There is no one who can calm the down. The life of everyone who has been in favour of the bill or voted for it is in danger.

During the December 1917 election campaign, the population in Quebec was so angry that the Unionists were unable to hold public meetings. The only Conservatives elected were three English-speaking members, while the Liberals won sixty-two seats. Canada was divided into two blocks, and French Canadians had to submit to the law of majority. They resisted as best they could under the constraint of the War Measures Act. Many conscripts fled to the woods or hid in lofts, many others sought exemptions.

The police looked for the missing youths as people's anger smouldered. In late March 1918, a riot broke out in Quebec City. The army intervened, martial law was declared, and soldier fired on the crowd. Five civilians were killed and dozens were injured.

Conscription in Quebec was a failure. Only 19,050 Quebecers were successfully conscripted while 18,827 others refused to submit.

Canada came out of the war deeply divided, and the experience had a profound effect on French-Canadians and their nationalist ideals. 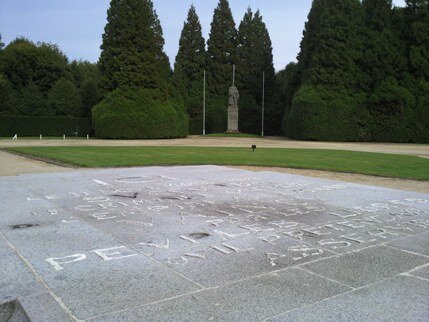 A military cemetery in France where thousands of soldiers died during the WWI rest for ever. Photo : © ProvinceQuebec