After the fall of New France, in 1760, for almost 15 years, only Protestants, selected from among a very small group of British immigrants and Huguenots, were entitled to occupy administrative positions in Canada. The anomalous situation was reversed in 1774, when Parliament in London adopts the Act of Quebec.

According to the Act, the French civil law is maintained in Quebec, religious rights and property of the French Canadians are recognized.

Therefore, they are allowed to hold public office since 1775, when the Act of Quebec comes into effect. The Act further stipulated that British territory south of the Great Lakes between Ohio and Mississippi Rivers would fall under the administrative control of Quebec City.

However, contrary to what British subjects in Canada had hoped, the Act of Quebec did not create a legislative assembly in the province (similar to those in the Thirteen Colonies). At the same time, a group of British merchants send a bust of King George III to Montreal, as a gesture to encourage loyalty to the Crown among the Canadians.

The bust was prominently placed on the Place d’Armes. On the eve of the Quebec Act coming into force, unknown vandals covered the bust with soot and hung an offensive sign over it: Here is the Pope of Canada or the English fool”.

The situation is unstable and it seems, the Canadians will join their neighbours from the south who moved towards ar irrevocable separation from Britain, in 1775. 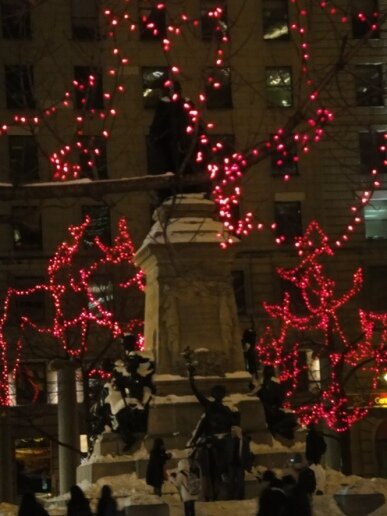