Foundation of the capital

Foundation of the capital

In the early 17th century the world, that is to say Europe, begins to be interested in fur. The fur trade era begins and it’s without a doubt one of the most crucial periods of the  history of New France. The fur trade drives penetration into the territories and its stable occupation, the Frenchmen begin to explore the Laurentian valley.

In 1603, Samuel de Champlain participates in an expedition led by Aymar de Chaste. After reaching the Anticosti island, the expedition goes upstream the Saint-Lawrence river. Champlain passes round the Orléans island and admires a waterfall that he will name Montmorency.

In his report, he very briefly describes the actual site of Quebec and continues his ride up the Saint-Lawrence river. This time Champlain decides to found the first settlement of the colony at Trois-Rivières: «To my mind, it will be a suitable place to live in and we will be able to fortify it promptly as it’s located by a big lake». The Frenchmen go upstream the river to Hochelaga – Montréal island, then return to France.

Five years later, in 1608, Samuel de Champlain receives new orders: found a site for permanent occupation along the Laurentian waterway. This time he chooses the actual site of Québec. He arrives there on July 3, 1608 and  notes : «No other place can be more convenient nor better located than the spit of Quebec called as such by the savages that is full of walnuts. Therefore Samuel de Champlain founds the first settlement at the Quebec straits.

The characteristics of this site are magnificent because the harbor is excellent and the hill offers possibilities of defence. Waterways being the best roads at that time, the Saint-Charles river is an asset. 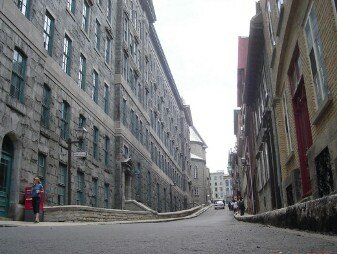 Champlain gives an order to build the first dwelling, that was a warehouse, a residence and a fort at the same time, at the foot of the cliff. However, troubles begin. First came a plot to surrender the colony to the Basque. Denounced by a sailor, the rebels are arrested and their leader hung further to a court-martial. His head is fixed on the point of a lance and displayed at the most eminent place of the fort. Then comes winter.

Like Jacques Cartier, Champlain brave incredible colds and twenty out of twenty-eight winterers die of scurvy (nobody knows why they didn’t use the recipe that saved Cartier’s crew). Champlain dreams of discovering a passage to the Indies somewhere in the west and for him,  the city of Québec is bound to have a brilliant future. He thinks it will be a counter for fur trade, a stopping place for navigation and the major fortress of the Saint-Lawrence valley. Champlain announces that the city will become the capital of New France that will stretch from Newfoundland to Louisiana. 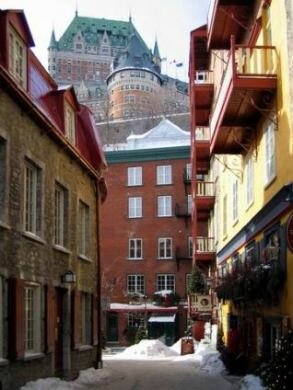 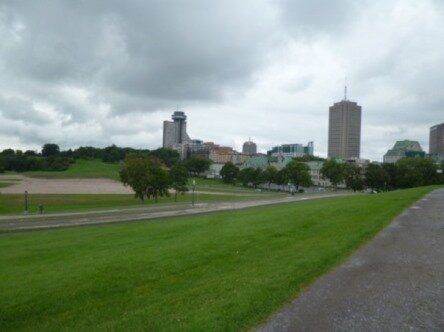 An Ideal Site to Found Quebec. On July 3, 1608, Samuel de Champlain, the lieutenant of Pierre du Gua de Mons, established a trading post where Place Royale is located today. “I have not found any more practical or better site than the point at Quebec”, he wrote in his travel journal.
Champlains’s site was practical thanks to its topography, which is formed by three major geological phenomena. Photo: ProvinceQuebec.com 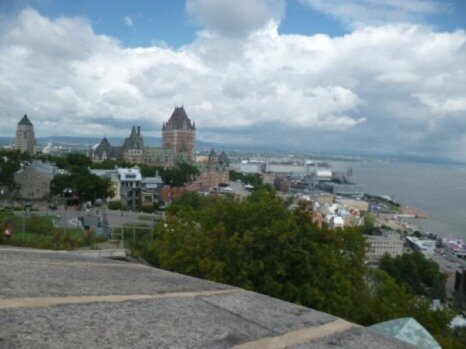 To the north, the Laurentians consist of hard granite from the Canadian Shield. The lowlands, which separate the Laurentians from the headland at Quebec, consist of crumbly sedimentary rock from the Saint-Lawrence Shelf. Orleans Island, the south shore and Cap Diamant belong to the Appalachian mountain chain.Photo: ProvinceQuebec.com 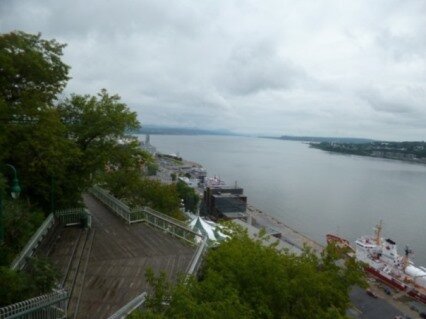 Samuel de Champlain obviously did not choose the site for its geological interest but rather for strategic reasons. The dominant cape was an ideal location when in 1620 the founder of Quebec built Fort Saint-Louis to protect against a possible enemy attack. The fort would eventually shelter the chateau of the same name, serving as the governor’s residence for more than 200 years. Photo: ProvinceQuebec.com