Le Chateau Frontenac stands high on a bluff, located in the heart of Old Quebec, overlooking the St. Lawrence River. The enormous complex is situated in Quebec's most prestigious and historic location. The Fairmont Le Château Frontenac is not merely a hotel, it has become the heart of the old city and the symbol of one of the most beautiful cities in the world, designated a United Nations World Heritage Site.

At Fairmont Le Château Frontenac guests are guaranteed a memorable and inspiring stay with easy walking access to all of the wonderful sites and experiences that Quebec City has to offer. This stately luxurious hotel offers nice guestrooms, exquisite dining experiences through renowned Chef Jean Soulard and a distinctive European charm where superior banquet facilities turn any business meeting, social gathering and wedding into an unforgettable event.

With its castle-like architecture and turrets, Château Frontenac was designed by American architect Bruce Price, working for the Canadian Pacific Railway. Bruce Price built the first wing of one of this most romantic and most photographed hotels of the world. It was one of "château" style hotels built at the end of the 19th and the beginning of the 20th century by the Canadian Pacific Company.

The hotel opened in 1893. It was named in honour of Louis de Buade, Count of Frontenac, governor of New France.

The Chateau Frontenac is operated by Fairmont Hotels and Resorts of Toronto, but the Legacy Hotels REIT owns the building.

The Chateau Frontenac combines the picturesque silhouette of a French Chateau with a practical sense of the future: its five wings added subsequently show their majesty. 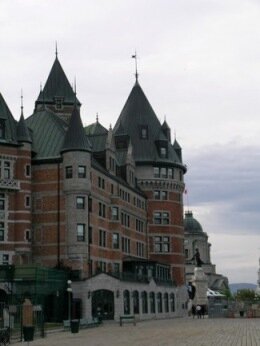