Quebec in the 17th Century

Quebec in the 17th Century

Quebec city in the 17th Century

From its foundation, Quebec city developed at a slow pace. In 1666, when the first census is done in New France, the city only has 500 inhabitants (Ville Marie - Montreal already has 625, even if it was founded 35 years later).

Out of those 500 citizens, more than 100 were monks and nuns. Only in 1663, when king Louis XIV took charge of the colony, Quebec city begins to progress and in 1681 its population exceeds one thousand three hundred residents.

However, as early as at the time of its foundation, Quebec city had the following layout that it kept for centuries:

In 1684, a traveller described the city as follows: «Quebec is divided into an upper and a lower towns. Merchants live in the lower one because of the convenience of the port, along which they built beautiful three-story houses of stone that is as hard as marble. The upper town is not less beautiful nor less populated.

The Castle (Château) built on the highest plot of land commands the city in all directions. General Governors that set their residence in this fort are comfortably accommodated there; it offers the most beautiful and extended view in the world».

Today, you can stroll down the neigbouring streets and revel in the charm of the historic homes. Linger at one of the numerous cafés you'll encounter along the way. You can visit nearby Artillery Parl National Historic Site of Canada and enjoy costumed interpretation activities and period buildings. Plonge into the old city, colonial Canada's first fortified site.

The fortifications bear witness to the evolution of Quebec's defence works from the 17th to the 19th century. Today, as the only fortified city in North America, Quebec has earned a place on UNESCO's list of world heritage sites.

Walk along the 4.6 kilometres of fortifications surrounding Old Quebec and enjoy the view of its gated rampart and a thousand and one vestiges of military structures. 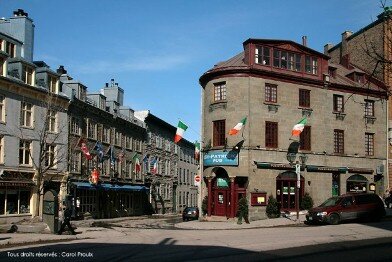