The Old Quebec City Funicular (Funiculaire du Vieux-Québec) is a funicular railway in the Old Quebec neighbourhood. It links the Upper Town to the Lower Town of the city, namely to the historic Petit Champlain district.

The funicular was conceived by William Griffith and opened on November 17, 1879, and originally used the water ballast system of propulsion and steam power, similar to that still used by the Nerobergbahn in Wiesbaden, Germany. Until 1907, the cabins scaled up and down the escarpment by means of a counter weight water process. The line was converted to electrical operation in 1907 by Alexander Cummings.

The system consists of two cars which move through a double track railway and work on electrical power.

On July 2, 1945, a fire destroyed the structure, necessitating a rebuild that was completed in 1946. This time, metal shelters were added. Since 1978, glass cabins are used in the train offering a panoramic view of the city.

In October 1996 Briton Helen Tombs was killed when the cable snapped and the emergency brake failed to stop the cabin before it crashed into the lower station. As much as 15 others were injured. Due to this accident the funicular was closed until 1998, when it was entirely revamped with modern technology. Today, this funicular is the only funicular of its kind in America.

The main entrance of the funicular is located in the historic House Louis Jolliet, 16 Petit-Champlain Street, in the heart of Old Quebec and near Place-Royale. This house was built in 1683 by the architect Baillif for Louis Jolliet. He lived here until his death in 1700.

Louis Jolliet was born in Quebec City in 1645. In 1666, he devoted his time to fur trading. Most importantly, during one of his expedition he discovered the Mississippi River with Father Jacques Marquette. Jolliet was also cartographer. 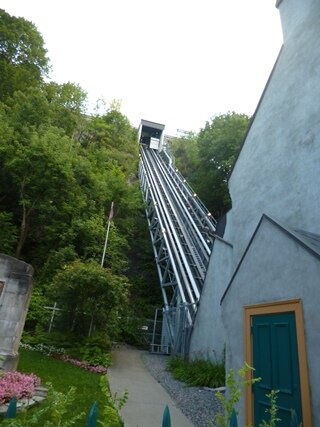 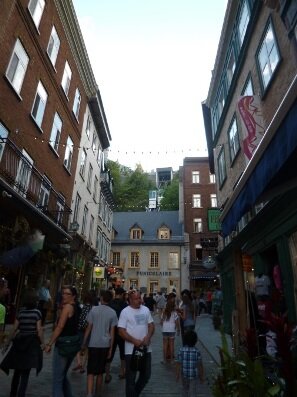 Louis Joliett house. Louis Jolliet (1645 – 1700). Native of Quebec, with Marquette, he discovered and explored the Mississippi, in 1673. Photo by ProvinceQuebec.com