The Cyclorama of Jerusalem is located in St. Anne de Beaupré, near the shrine of St. Anne. It shows what Jerusalem might have looked like at the time of the crucifixion of Jesus.

As the viewers stood in the center of the painting, there would often be music and a narrator telling the story of the event depicted. In the XIXe Century, circular and hexagonal-shaped buildings were constructed for the cycloramas in almost every major US and European city, and hundreds of cycloramas were produced.

The cyclorama of Jerusalem, painted by Paul Philppoteaux and his team, has been on display in Quebec since 1895. The Cyclorama is one of the world's biggest and it is 14 meters x 110 meters.

Executed in Munich, Germany, from 1878 to 1882, the monumental work is creates an illusion of life and relief that is so real that it gives visitors the feeling that they are themselves in Jerusalem and that they relive the sight of Crucifixion.
Paul Philippoteaux, famous French artist with an international reputation, who has executed among other famous panoramas, the "Siege of Paris", the "Battle of Gettysburg" and the "Waterloo", was chosen to be the leading artist.
The five other associates, also recognised with a world celebrity, who assisted him in that colossal work, are: Messrs. S. Mège and E. Gros, of Paris, C.A. Corwin and O.D. Grover, of Chicago and E.J. Austen, of London. 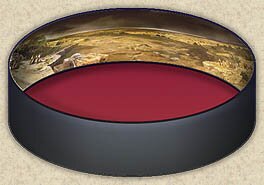 Plan of the cyclorama. Photo : www.cyclorama.com

From the observation point, you can contemplate all the city of Jerusalem and over 80 kilometers of surrounding countryside at the four cardinal points. Finding yourself again in biblical times in the heart of Holy Land will fascinate you.

The worldwide fame of this panorama realization attracts a great number of tourists and pilgrims to St-Anne-de-Beaupré. Visitors climb a flight of steps and enter a vast room containing the Cyclorama, which is an unbroken wall surface of canvas. They stand on a 15-metre diameter central platform, raised 5 metres of the ground and surrounded by a guard rail. Then they may walk around that gallery to admire the 110 metres of panorama which is beautifully illuminated by indirect lighting.

Year after year, this cyclorama of Jerusalem remains the most attractive and the most impressive rendez-vous for thousands and thousands of tourists and pilgrims. 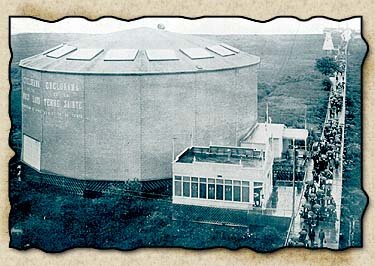 Cyclorama of Jerusalem in 1895. Photo : www.cyclorama.com

Address of the Cyclorama of Jerusalem: