The Price (Edifice Price) is located at the heart of Old Quebec, that’s Quebec City historic district. The Price is the very first skyscraper built in Quebec City and one of the oldest in Canada, with its roof elevating at 269 feet (82 meters).

The building of 18 floors was completed at the cost of 1 million $ in 1931 by the architect studio Ross and Macdonald, a prestigious firm of architects based in Montreal. It was built amid controversy for Price Brothers ltd. Indeed it is the tallest building in the Old Quebec till now. In the 1920ies Quebec City, eager to demonstrate a progressive ethos, gave assent to the project despite heavy criticism that the administration permitted the demolition of two historic houses and proved thus unable to protect Québec's historic area.

In 1927, two brothers, John Herbert and Arthur Clifford Price, inherited the prosperous Price Brothers Limited after the 1924 death of their father, Sir William Price III. The decided thus to build a new headquarters for the company.

Édifice Price was constructed in the art deco style of the time. The design uses setbacks to gradually taper floor area down, yielding the typical elongated "wedding cake" shape which contributes in reducing loads and softens the building's visual impact on the city's skyline. The upper setbacks were later used to build balconies. Geometric motifs are carved in the Price Building's stone cladding, especially over the first few levels. The building is topped by a more classical steeple copper roof, the final composition showing Beaux-Arts influences.

The main exterior decorative themes are pilasters topped with palm motifs, pinnacles and a large vaulted arch with extrados over the main entrance.

Although completed successfully, the building turned out to be an extravagant nail in Price Brothers' coffin. The Great Depression pushed the company to the brink of bankruptcy, and the Price Family lost both control of the company and most of its fortune.

In 1983, the Price Building was acquired by the city of Quebec, which largely used it for its civil engineering division.

The Price Building became the location of an official residence for the Premier of Quebec, in 2001. The Premier occupies two of the upper floors. 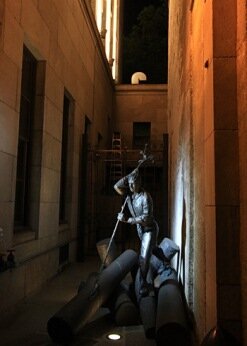 A Price Memorial is attached to the building: The "L'Homme-Rivière" ("The River-man") was unveiled in 2002 on Sainte-Anne between the Price Building and its right-hand neighbour. The memorial is in the form of a sculpture. It was sponsored by the CDP and the Virginia Parker Foundation, and designed by artists Lucienne Cornet and Catherine Sylvain.

L'Homme-Rivière represents a log driver at work. The logs are heavily stylized, reduced to little more than cylinders. The driver and his hook, however, are shown as transforming into a wooden plant. Its location, in a tight space between two tall buildings, gives the sculpture the appearance of travelling down a river gorge. In fact, the log driver is a symbolic figure in the history and culture of Quebec, thanks notably to Félix-Antoine Savard's famous novel Menaud, maître-draveur, translated in English by Alan Sullivan as Boss of the River in 1947 and by Richard Howard as Master of the River in 1976.

Nowadays, the Price building (Edifice Price) is considered an architectural monument in the capital of Quebec and a defining element of the city's skyline. Of its 18 floors, 15 are used as corporate space, two constitute the Premier's suite, and on top is a mechanical floor. 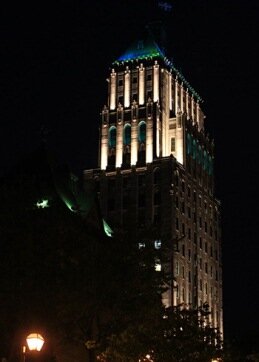 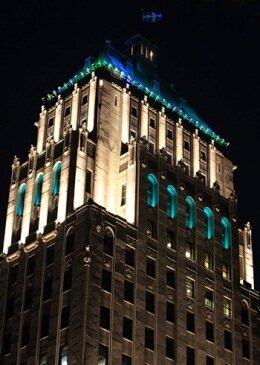