The tourist bureau of the province of Quebec in Quebec City - Information touristique, is located in a handsome building built in 1805 as the Old Union Hotel.

Several years later it became the meeting place of the bourgeois Baron's Club.

The building was designed by a master mason Edward Cannon, an Irishman from Wexford County, in Ireland.

Three of his sons John, Lawrence and Ambrose became architects.

The contracting company Edward Cannon and Sons built many of the most prestigious houses, churches and other buildings in Quebec City.

Members of the family were contractors in the capital of Quebec for many years.

The building is located on the Place d'Armes (Ste-Anne Street borders the Place), near the Chateau Frontenac. 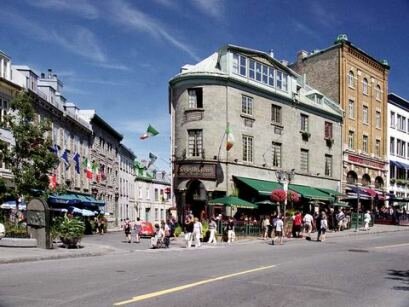