Bridge of the Island

Bridge of the Island

Bridge of the Island

The Ile d'Orleans Bridge is a suspension bridge that spans the St Lawrence River between the Beauport borough of Quebec City and the Orleans Island. Its total length is of 4.43 km or 2.75 miles. It has two-lane road, and its width is of 9.6 m or 31 feet.

The bridge rises 65.88 m (216 feet) to top of towers. The longest span is of 677 m (2,221 feet.) From the beginning of New France, the islanders used boats and canoes to cross the St. Lawrence in the summertime. Later, a ferry service was accessible. When winter came, ice bridges were naturally created between the Orleans Island and the shore. Sometimes, snowmobile enthusiasts use the ice bridge to cross the river even today.

The bridge of Orleans Island was built as part of a campaign to fight unemployment, during the Great Depression of 1929. The construction began in 1934, and it was inaugurated on July 6th 1935. That day it was named Pont Taschereau, after Louis-Alexandre Taschereau, member of the parliament representing Montmorency County and then Prime Minister of Quebec. Indeed, it was built as an electoral promise made by Mr. Taschereau to Montmorency County for a job-creation project.

The bridge is the furthest downstream of the St. Lawrence River's fixed crossings, although it does not cross the entire river. The Island bridge is part of Quebec Route 368 and connects to Autoroute 40 (Highway) on the north side. 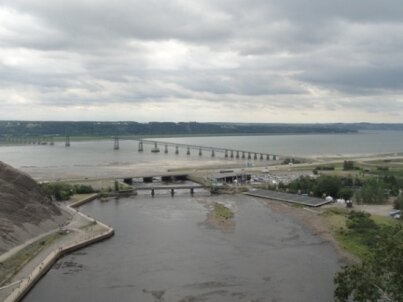