Who was La Cetière ?: Florent de la Cetière, for whom the park is named, was best known as the royal notary. A jack of all trades, he was also a carpet maker, a publican, a court clerk, a seneschal, and a seigneur. Between 1702 and 1728, he drew up a number of notarial deeds for the residents of Place-Royale. His career was strewn with questionable acts and, upon his death, he left more debts than assets.

At the bend in the road to Upper Town: Between 1650 and 1660, the Governor of New France, Jean de Lauzon, ceded the lots on which the par La Cetière stands. The new owners quickly built houses on their property.

Jacques Maheu was one of them. He owned four pieces of land around Québec. He raised a few animals and busied himself with farming, hunting and fishing.

Six different wigmakers set up shop in Place-Royale between 1725 and 1760. Florent Michaud lived in the house on the corner of rue Notre-Dame and Côte de la Montagne for over 20 years.

The bolt of material bearing this lead seal came from Lyon, a major French textile centre. The Lyon silk factories were known throughout Europe. 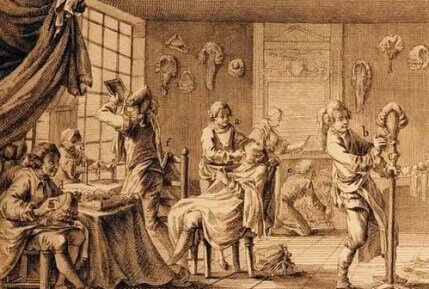 The art of fitting a wig: illustration taken from Diderot and d’Alembert, L’Encyclopédie, 1771. 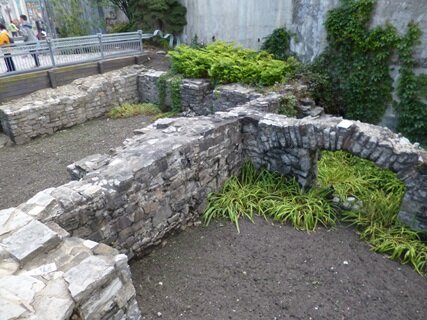 Remains of the Gaillard and Soulard houses: Guillaume Gaillard inherited this small half-timbered house from his father-in-law, tailor Philippe Nepveu, in 1701. He had been living in it since 1694. Gaillard was a member of the Sovereign Council, a businessman and a seigneur.

The Maison Gaillard would be annexed to the house just to the south of it, following the shelling by the English in 1759.
Jean Soulard, goldsmith and gunsmiths, had a stone house built on this spot around 1605. He rented it out to local merchants. 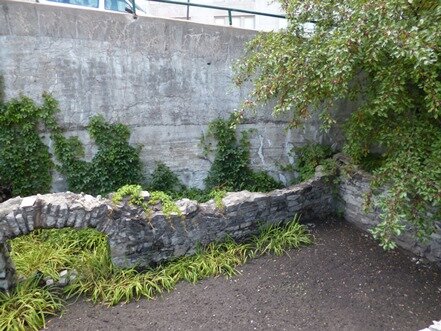 At the time, the cellar of the houses on Place-Royale were used for storing food and supplies. The small grated windows let in air and some light.

A. Load-bearing wall for the main architectural elements of the supper floors.
B. Arched chimney base, to distribute the weight of the chimney.
C. Grated window.
D. Rear courtyard.
E. Connecting door to neighbouring house. 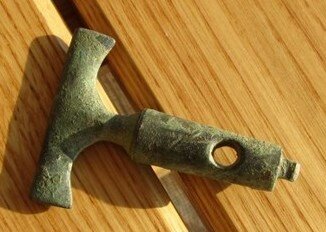 A clock-maker of the time: The 19th century witnessed a revolution in time. A working day was no longer based on the progress of the sun, but on a set schedule. For a member of the bourgeoisie, a watch was the symbol of power and efficiency. For a worker, it was a luxury, often the most valuable of his possessions; it was the symbol of his dream of joining the ranks of the merchant class as soon as possible.

Isaac Devlin, clock-maker and jeweller, had a shop on the corner of Notre-Dame Street and Cote-de-la-Montagne in 1846. He sold and repaired watches, clocks, pendulums. He also sold earrings, rings, necklaces, broaches, crucifixes. But there was more… He stocked musical instruments and sheet music, kitchen utensils, scissors, pens, thimbles, combs, pocket books, razors, spectacles and binoculars. For children, he carried bells and wind-up musical toys. 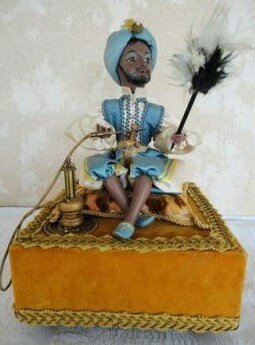 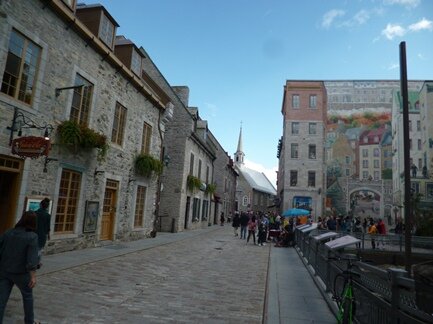 Reconstruction of Jacques Maheu’s half-timbered house. The frame is made of posts set at regular intervals; the spaces between are filled with a mixture of stone and mortar, and covered with a coat of wet dash (Musée de la Civilisation, archives of the Musée de l’Amérique française, Place-Royale Collection. Drawing by Robert Côté.
The music of summer: traditional musical performance. Discover a deep-rooted musical heritage that’s a traveled many a highway, byway, and backroad.
Clothing of the wealthy between 1680 and 1700. Illustration from M. A. Racinet, Le Costume historique, 1888.