1878 The telephone (invented by Alexander Bell in 1876) is introduced in Quebec City.

1879 Quebec - Montreal - Ottawa Railway is completed. It goes further to the West the next year.

1880 O, Canada, the future Canadian anthem, composed by Calixa Lavallee and Adolph Routhier, is performed in Quebec City for the first time.

1885 Quebec's Legislative Assembly adopts Manufacturers' Law. The law limits work hours to 72,5 hours a week for men, 60 hours a week for women and children. Employers manage to find some loopholes.

1885 Public anger is fuelled among French Canadian as Metis Rebellion in the Canadian West is put down and its leader Louis Riel is hanged.

1892 The first wing of Chateau Frontenac, one of the most photographed buildings in the world, is built in Quebec City.

1897 The first car appears in Quebec City. It travels at 29 km/h down the St. Foy Road in third rear.

1900 More than five thousand shoe workers of Quebec City go on strike. The conflict will last for nearly two months. 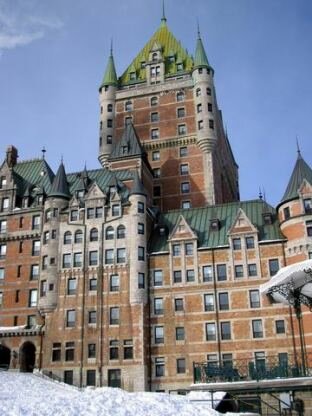