Quebec City Under a Siege

Since its foundation, Quebec City becomes an important fortress that protects the Laurentian valley. It’s located at the stopping place of oceanic navigation which is a strategic site.

This is why invaders into Canada always aimed at seizing Quebec. The city was besieged 5 times (or six including the siege by the French led by Levis in 1760). In 1629, Samuel de Champlain surrendered the city to Kirke brothers, English emissaries, but three years later Québec becomes French once again as a result of the signing of Saint-Germain-en-Laye treaty.

In 1690, the city led by governor Frontenac, holds out against the assault by Phipps. In 1711, admiral Walker attacks it but a large part of the fleet bumps into reefs of île-aux-Œufs island, and he returns to Boston where his flagship explodes on its way into the haven (was it a series of coincidences or a curse?).

In 1759, English troops under leadership of Wolfe got the better of the French of Montcalm and a year later knight of Levis (chevalier de Levis) attacks the city to take it back but doesn’t succeed.

Finally, in December 1775, the American general Montgomery falls and his army is pushed back. Conflicts between the French and Englishmen rise around disagreement on fishing rights, borders delimitation and taking over territories as it was the case of Acadie.

The colonies often fight even before the mother country declares war. Quebec city particularly suffered from the French’s defeat in the Seven Years’ War in 1759.

On February 10, 1763, as a result of the Treaty of Paris, New France becomes an British colony and Quebec city is pushed into the second rank of cities of Quebec. 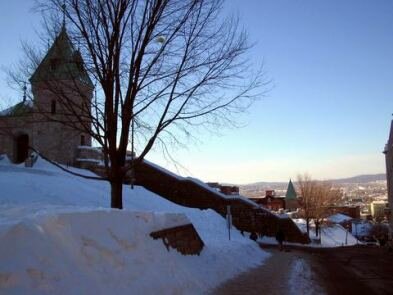