In 1892, an American architect Bruce Price, working for the Canadian Pacific Railway, built the first wing of one of the most romantic and most photographed hotels of the world, the Chateau Frontenac. This enormous complex is situated in Quebec's most prestigious and historic location.

The Chateau Frontenac combines the picturesque silhouette of a French Chateau with a practical sense of the future: its five wings added subsequently show their majesty. The hotel is perched atop a tall cape overlooking the St. Lawrence River, thus giving a spectacular view for several kilometres.

Today, standing high on a bluff overlooking the mighty St. Lawrence River, Fairmont Le Château Frontenac is not merely a hotel, it is the heart of Old Quebec, one of the most beautiful cities in the world.

With its castle-like architecture and turrets, le chateau is a truly dream castle. The Château Frontenac opened in 1893, five years after its sister-hotel the Banff Springs.

The Château was named in honour of Louis de Buade, Count of Frontenac, governor of the colony of New France in the 17th Century.

During the Quebec Conference of 1943, at which Winston Churchill and Franklin D. Roosevelt discussed strategy for the Second World War, much of the staff stayed nearby in the Château Frontenac.

The building is the most prominent feature of the Quebec City skyline as seen from across the St. Lawrence, and is a symbol of the city. The hotel is built near the Plains of Abraham. Fairmont Chateau Frontenac, the most prominent feature of Quebec City, is located a short distance, with easy walking access to all of the wonderful sites and experiences that Old Quebec has to offer. 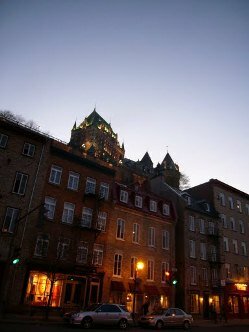 Frontenac Château is one of the most distinctif sights of the Old Quebec. Photo: © ProvinceQuebec