Ile d'Orléans - Orleans Island is located around 20 kilometres and only 15 minutes drive from Quebec City, in the St. Lawrence River.

The island is 34 kilometres long and 8 kilometres wide. The island is 75 km in circumference. Before the arrival of the French, it was called Ouindigo or Minigo by the Huron who lived there. The French explorer Jacques Cartier first set foot on the island in 1535. It's believed that he landed near what is now the village of St. Francois.

According to some sources, the term Ouindigo meant Bewitched place in Algonquin. Actually, the islanders are sometimes referred to as the "Sorcerers of the Island". Jacques Cartier baptised the island Ille de Bacchus due to the abundance of wild grapes growing on the island. The name was later changed to Ile d'Orléans, thus honouring the King of France. Many French settled here in the early times of New France. From the beginning of the colonization, the island was part of the domain of Beaupre. Most of the first settlers came from Normandy and the Poitou.

The first census in Canada, carried in 1685, counted 1205 inhabitants living on the island. In 1940 a bridge was built to connect Quebec City to the island. The Orleans Island was granted the status of National Historic District in 1970. The island is a mix of suburban communities and farms, and is a popular destination for day-trippers and bicyclists. It is still a rural place famous for its strawberries, apples, potatoes and wineries.

There are also sugar maple stands producing maple syrup and other products here, as well as a buffalo farm.

Administratively, the island is within Quebec's Capitale-Nationale region, and constitutes the L'Ile-d'Orléans County. About 600 buildings are recognized by the Government of Quebec as being part of the cultural and historical heritage, including the oldest church in Nouvelle France.

An old story about a sorcerer: Jean-Pierre Lavallée. In 1711, Lavallée, living on the island of Orleans was credited with wrecking 8 British warships by sorcercery. When Sir Hoveden Walker sailed up the St. Lawrence with a huge fleet he reckoned without Lavallée, a known sorcerer, who went to work with his spells and incantations. He produced a fog so thick it caused the British ships to drigt on to rocks. The surviving ships withdrew.

The following municipalities are located on the Orleans Island: 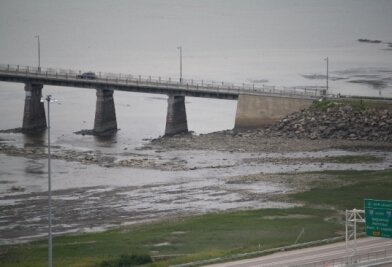