Artillery Park is a National Historic site of Canada, located in the heart of Quebec city, at the corner of St-Jean Street and D’Auteuil Street, in Old Quebec. The historic complex comprises military barracks and military storage buildings built in the colonial era, when this site served as a part of defensive works surrounding Quebec. Indeed, the place is strategically established on the edge of St-Lawrence River.

Three patrimonial buildings can be visited here: the Dauphine Redoubt, built as early as in 1712, during the French regime, the Officers’ Quarters, dating back to 1818, when the British were owners of the site, and the Arsenal Foundry, built in 1903. Guests are welcomed by French and British “soldiers and officers” with their wives.

These colonial era characters have a lot to show visitors during a guided tour through three centuries of the military history of the site. Soldiers perform musket practice using real black powder. Within the premises, the Economuseum of the Dames de Soie Doll is located, presenting a lovely collection of collectible dolls.

Visitors can enjoy an unobstructed view of Quebec city and of the St Lawrence.

The Royal Battery in Action

From 1691 to 1759, the Royal Battery faced no enemies but the elements. At the time, it was surrounded by the St. Lawrence River and buffeted by tides, currents and ice, which caused extensive damage. Over the years, numerous repairs and readjustments were made.

The battery finally saw its first and only action in 1759, the year of the Conquest. General James Wolfe had brought the British Army to Quebec, and for three months, Commander Monckton and his gunners bombarded the city from the Levis shore. Between July 12 and September 13, over 40,000 cannon balls and 10,000 shells rained down on Québec. As a defensive fortification known to the enemy, the Royal Battery was a frequent target and hundreds of houses behind it were reduced to rubble. Final defeat came with the Battle of the Plains of Abraham on September 13. The city surrendered five days later. 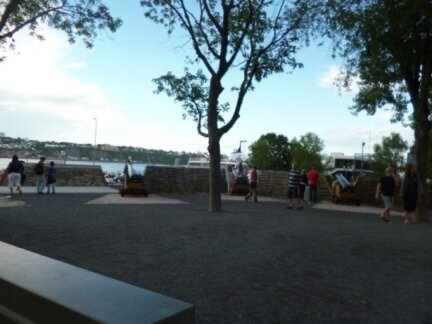 Its military functions obsolete, the battery was subsequently used as a wharf. Over the cours of the 19th century it was gradually built over and buried under fill. It was restored in 1977 after archaeologists discovered the buried ruins. 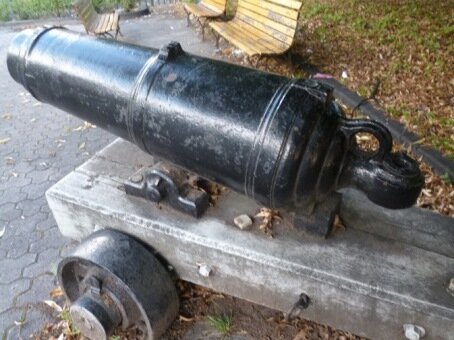 This carronade is shorter but powerful cannon developed in Great Britain in 1778. It was cast at the Carron foundry, whence it gets its name, and continued in use for most of the 19th century. The piece bears the Broad Arrow, the mark of the British army. It was probably used to defend the Quebec Citadel. It is of 32 calibre and fired cast-iron balls which were 6.1 inches in diameter (15.5 cm) weighing 32 pounds (14.5 kg). This carronade is mounted on a sliding carriage fitted with a wooden skid block, a model which became popular after 1859. The block provided a more effective absorption mechanism for the considerable recoil of these guns. From 1864 on, the British army restricted Carronades to the defence of the less exposed flanks of fortifications. 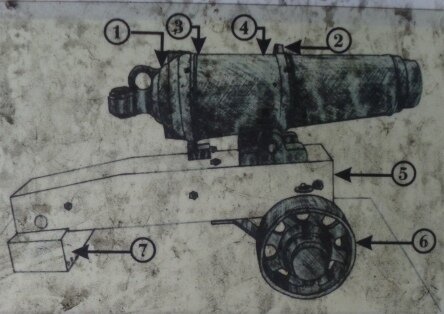