The Tourny fountain was donated to Quebec city by businessman Peter Simons for its 400th anniversary. The fountain is installed in front of the National Assembly of Quebec. The fountain is seven meters high and four meters wide. It has 43 jets. The statues of a man and three women that decorate the base of the fountain symbolize water whereas four children holding hands above the first basin represent navigation and fishing.

These statues were created by sculptor Mathurin Moreau. This impressive work was created in Barbezat foundry of Val-D’Osne, France, in 1854. Six copies of the fountain were made. A year later, the fountain obtains a gold medal at the Exposition Universelle de Paris (Paris World Fair).

In 1857 the fountains are placed in the Allées de Tourny - Tourny Alleys in the heart of Bordeaux. In 1960 the city of Bordeaux decides to remove the fountain from the city center because of the high maintenance cost. Indeed, the fountain was in a poor condition as it hadn’t been maintained since the World War I. It was dismantled and stocked in the Château Larivière (Lariviere castle) near Bordeaux.

At the beginning of the 21st century it was bought by Parisian antique dealer Marc Maison.

In the spring of 2003, Mr. Peter Simons, president of the famous Québec Maison Simons clothing store is visiting Paris. He’s looking for old woodworks for his store in Old Quebec and he discovers the fountain at Marc Maison’s at Saint-Ouen flee market. Afterwards the work is transported to Québec where it’s stocked in a barn on the Ile d’Orleans island and restored. 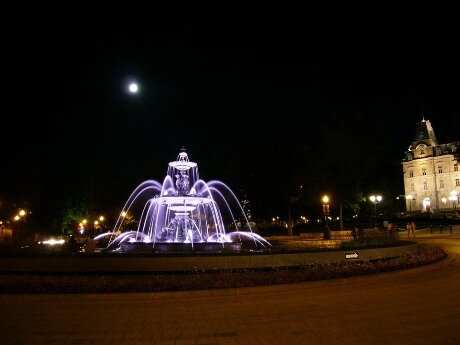 On July 3rd, 2007, the Tourny fountain is officially inaugurated on the occasion of the 399th anniversairy of Québec. The five remaining fountains created with the same mould are located in Europe in the cities of Angers, Geneva, Porto, Saint-Quentin and Soulac.

Inscription on the plaque : Winner of the Gold Medal at the Paris World Fair in 1855, this fountain and another like it stood at both ends of Les Allées de Tourny in Bordeaux, France. It is being presented as a gift to the City of Quebec on the occasion of its 400th anniversary by Simons House, founded in Quebec in 1840.

Water from the birth of time, water from the deepest depths of Earth, from the crests of age-old glaciers, the waters of our rivers, great and small have carved out our country. We are of this place, we are Huron-Wendat, Innu, Cree, Abenaki and all our brothers. We are from France, From Scotland, Ireland, England and from other lands for 400 years. Water has flowed into our open hands, hands that will carry Quebec from now to tomorrow. Here past meets future, here, the present meets future, here, the present surges mightily. Here, Quebec asserts itself loyal and proud strengthened by our past forever courageous and determined never to die. (Marie Laberge, 2008) 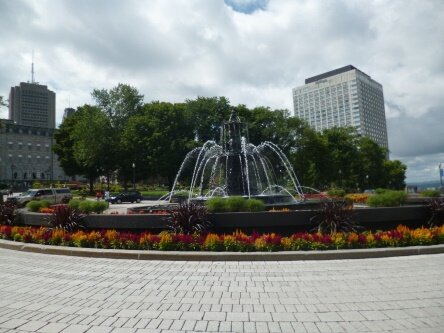 Photos of the Tourny fountain in Québec : © ProvinceQuebec.com