The Quebec Garrison Club was incorporated in 1880 by a special act of the legislature but it had existed since 1879 as an association. The club was founded by Canadian militia officers. The Club is located in a patrimonial building on St. Louis Street, close to St. Louis Gate. It was erected in 1816 as the headquarters of Royal Engineers.

Its classic architecture is characterized by spacious rooms, high ceilings, elegant decor, a delightful garden as well as many antique furnishings and works of art. The building has undergone major renovations in 1992-1993.

The garden, with very old trees, is one of the most beautiful in Quebec City. Before the Quebec Garrison Club, there was in Quebec City the Stadacona Club. It was founded in1860 and it was located at 41 ½  d'Auteuil Street. Most of its members were civilians. A few British officers of the Royal Engineers Corps became its members until the withdrawal of the British troops from Quebec in 1871.

The club operated in the pure tradition of British private clubs, both civil and military, as a social and recreation facility, and it was for many years favourite gathering place for the English of Quebec City. In 1943, the Cercle Universitaire was founded.  In 1984, the Quebec Garrison Club and the Cercle Universitaire merged as a new corporation, and took over the property of the Garrison Club at 97, St. Louis Street. Numerous institutions and corporations of the Quebec area use the Club's facilities to develop their contacts and undertakings. 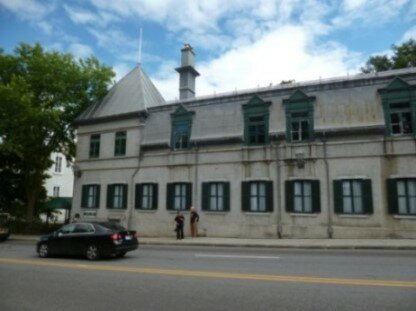