The Citadel of Quebec

The Citadel of Quebec

The Citadel of Quebec

A small city unto itself

The word citadel comes from the Italian cittodella, meaning “small city”. Just as with a city and its inhabitants, a citadel sheltered a garrison for whom the structure’s internal organisation was vital to their survival. As a self-enclosed environment largely isolated from the outside world, a citadel consisted of a variety of spaces: lodgings, storehouses for equipment and food, cisterns for water, a hospital, an armoury, powder magazines.

From 1820 onwards, Quebec’s Citadel was designed to serve as a permanent fortress capable of withstanding the test of time. The defensive works were clad in masonry, while the buildings were constructed in stone with brick vaultwork so as to better withstand enemy shelling. Most of the buildings are still used today by the Royal 22e Regiment…

History of the Citadel

As soon as they founded Quebec in 1608, the French recognized the defensive potential of Cap Diamant, also sometimes referred to as Cape Diamond. Over the years, the French constructed defensive works which were integrated into the enceintes, or protective walls, enclosing the city on the west side. However, for lack of sufficient funding by the King, they were unable to complete their project of building a citadel.

In 1759, following the Battle of the Plains of Abraham, New France was ceded to England. Though British military authorities continued to worry that France would reconquer the territory, they soon discovered that the real danger lay in the United States. In 1775 and again in 1812, the Americans attacked Canada, each time without success.

The British Army in Quebec: Then came the British

Following their conquest of New France, the British military authorities called for the construction of a citadel in Quebec. Initially, London balked at underwriting the significant outlay entailed by a project of this scale, but in 1775 the siege of Quebec by American troops proved that it had become an urgent necessity. Authorization was then given to erect a temporary citadel out of earth and wood.

Work began in 1779 and continued thereafter in both summer and winter, but was interrupted in 1783 when the peace treaty was signed with the United States. At the time few constructions had been completed and the temporary citadel was left unfinished.

During the Napoleonic Wars, England had to contend with both France and the United States. Wishing at all costs to preserve its Canadian colony, she decided to bolster Quebec’s defence capacities by supplementing the works left pending in 1783 with one new cannon battery, three powder magazines and two storehouses for supplies and cannons.

Vestiges of the temporary citadel of 1779

The archaeological excavations carried out by Parks Canada in 2003 and 2004 took place before the construction of the new pedestrian way. Vestiges of the temporary citadel were discovered, along with large quantities of debris left by soldiers who had participated in certain construction-related tasks of the time.

Excavation revealed an impressive four-metre-high limestone escarp. It was located immediately under the lawn overlying the glacis of the 1820 citadel.

For England, the entire colony would be lost if the invaders succeeded in capturing the city of Quebec. This made it essential to protect the city with a fortress capable of resisting a siege until such time as reinforcements could be dispatched to the scene. In 1820, London authorized the building of a permanent citadel, despite the high costs involved in such a project.

At the time of this decision, the Upper Town was already protected on all sides, especially to the west, by an imposing bastioned wall and four Martello towers. In addition, the Cap Diamant cliff was enclosed by a high wall so as to thwart any attempts at scaling it. With a citadel looming over it, Quebec became, for a time, practically impregnable. Indeed, in his American Notes of 1842, Charles Dickens dubbed the city and its cliff the Gibraltar of America.

Not surprisingly, construction of the Citadel began with those buildings essential to the business and well-being of the troops. Officers and regular soldiers each lodges in separate quarters, designed to accommodate a total of nearly 800 men.

All buildings were set close to the bastions so as to afford them fuller protection. A central area devoid of any construction served as a parades ground, where troops mustered and performed drills.

Following the Patriot Rebellion in 1837 – 1838, the British decided that the Citadel was in need of further protection and thus built several defensive works in the ditch. However, with the development of a new generation of powerful cannons in the 1850s, the city defence system was rendered obsolete as soon as it was completed.

Barracks conditions for the soldiers were also improved. A hospital was added for the care of the sick, while a heated, lighted prison replaced the dark, dank cells of the Dalhousie Gate guardhouse.

Between 1806 and 1808, a succession of some ten British regiments took part in this works project. The artifacts on display in the Citadelle stand witness to their tour of duty in the first half of the 19th century.

The vestige represents but a portion of a curved construction some 40 metres in length. The stone wall retained a thick earthen rampart that shielded the blockhouses in the gorge og the Glaciere bastion from enemy artillery.

The soldiers left behind a large amount of debris, including buttons from clothing, heaps of discarded beat bones, and hundreds of shards of ceramic and glass objects made in England. All this material was found in the earth used for fill.

These vestiges had not been demolished but were simply buried under the Citadel’s earthen glacis dating to 1820. Once the archaeologists had finished their survy, the remains were reburied to ensure their protection.

The Quebec citadel consists primarily of:

The Pedestrial Way, then and now

As of 2005, pedestrians have been provided with a new, safer route of access to the Citadel, It is located just to the side of the original entryway, a narrow, winding road which is now reserved for vehicles.

For nearly two centuries, the access lane designed by British engineer Durnford afforded the only wat into the Citadel. It represented an extension of the Fortifications roadway built behind the west wall to facilitate the movement of troops and war materials.

One gate to clear: The entryway provides access to the ditch surrounding the main body of the Citadel. To truly enter the fortress interior, however, visitors must proceed through the main entrance at Dalhousie Gate, where armed sentinels stand guard.

The original entrance gate, which was probably made of wood, was replaced in 1849 by an iron chain-link gate. At the same time, a guardhouse was set up nearby in order to closely monitor comings and goings.

Tucked away from view in the glacis, the narrow entryway allowed no more than a single cart or small group of soldiers to pass through at a time. Its winding form concealed the far end and reduced the enemy artillery’s firepower by deflecting incoming cannonballs.

The Citadel is concealed from the exterior by the glacis, thus preventing the enemy from directing its cannon fire at any specific target.

The Citadel dominates the city and the surroundings and with its 50 cannons can mount a successful defense on all fronts.

The Citadel also protected the port. Smooth-bore cannons were able to hit targets as far away as the other side of the river, that’s at 1 km of distance, while the Armstrong cannon, acquired during the 1880s, could project shells for a distance of up to four kilometres. 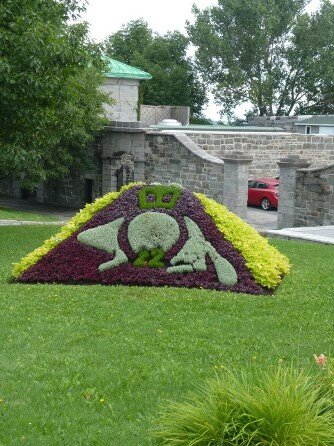 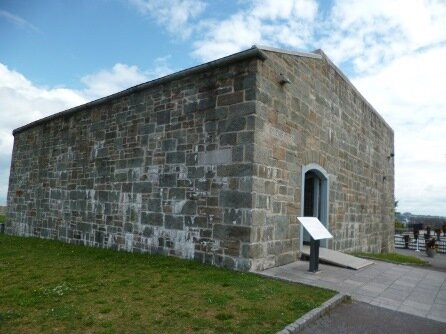 The Cap-aux-Diamants Redoubt: Built between 1693 and 1694, this defense work is one of the few remains of the first fortifications in Quebec City and one of the oldest military buildings in Canada. This redoubt and its artillery covered the heights located to the west, on today’s Plains of Abraham. 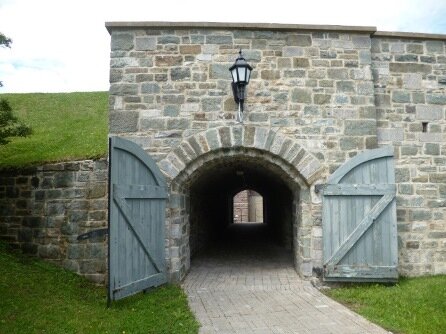 What is a redoubt? – It is a military work that can have various defensive purposes. In this case, the Cap-aux-Diamants Redoubt contributed to strengthening the fortified perimeter on the Western edge of Quebec City. A part of this redoubt housed rooms used as soldiers’ quarters, a stock room, a powder magazine and a prison. It was surrounded by a small rampart topped by a parapet with embrasures for firing cannons. Photo: © ProvinceQuebec.com 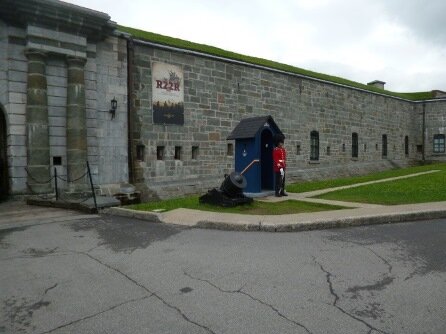 Entry to the Citadel. Photo: © ProvinceQuebec.com 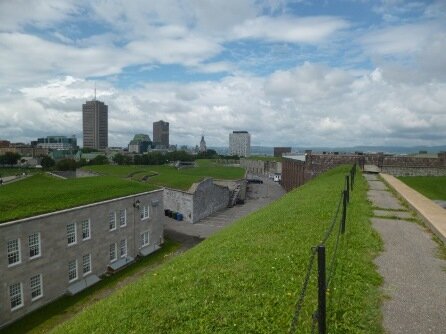 Originally, the redoubt of the Diamond Cap was surrounded by an earthen rampart supported by a wall, and could lodge some ten soldiers. During construction of the Citadel, this rampart was razed, with the cannon then being trained in the direction of the St. Lawrence River. Photo: © ProvinceQuebec.com 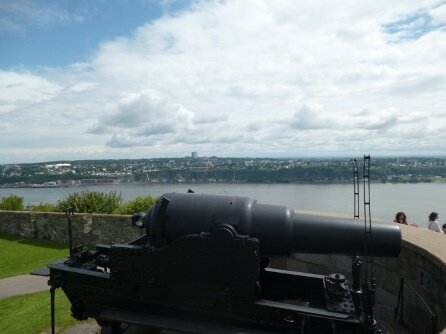 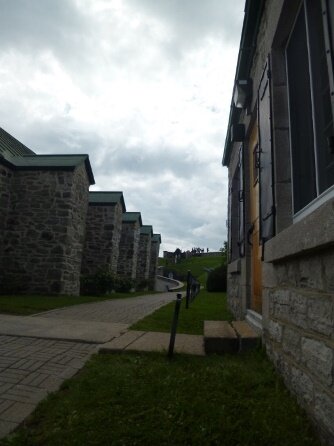 The Cap Diamant powder magazine is another French construction that has successfully survived until our time thanks to its strategic position. It was originally located behind the fortification wall dating to 1745 and from which two bastions were subsequently integrated into the British citadel of 1820. Photo: © ProvinceQuebec.com 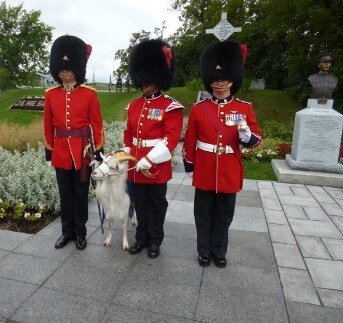 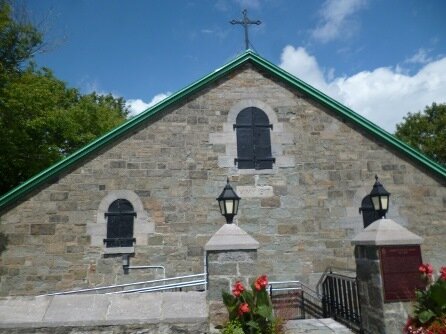 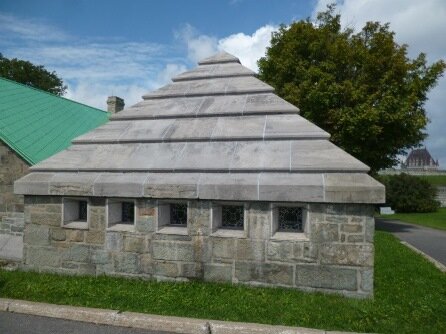 Powder magazines were used for storing gunpowder and were hidden within the bastion gorges in order to prevent enemy artillery from locating and destroying them. Photo: © ProvinceQuebec.com 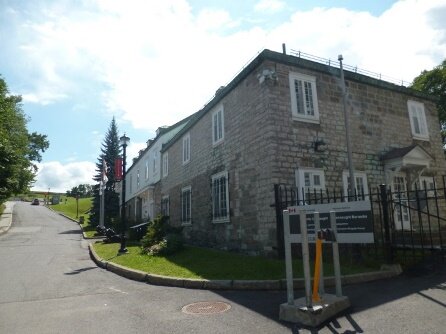 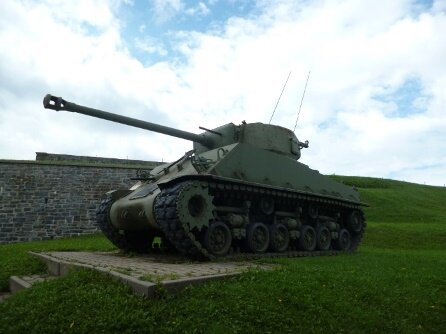 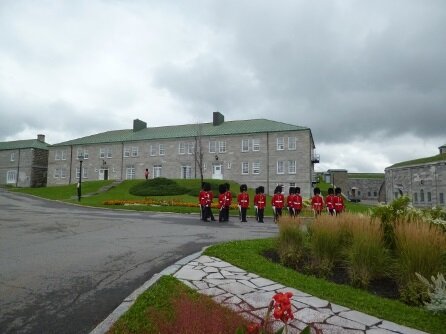 Changing of the guard. Photo: © ProvinceQuebec.com 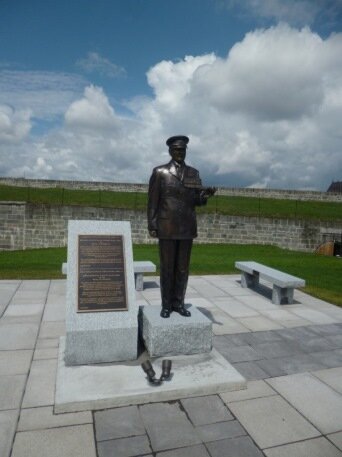