This building is associated with the development of astronomy in Canada and with time keeping. It is the first, and may also be the oldest, existent observatory building in Canada.

Ball House was the most accurate source of time available to navigators for a number of years. They used the time ball for time keeping from 1852 until at least the 1880s and probably the 1890s. During the navigation season from May 13th to November 29th the time ball was used every day except Sunday. It was raised to the half-way point at 12.45 p.m., was at the top by 12.55 p.m., and was dropped at 1.00 p.m. local time.

The Observatory on the Plains of Abraham

In 1874, the Citadelle’s observatory and its instruments were moved to a new building located in Bonner pasture on the Plains of Abraham. The time ball remained at the Citadelle and was converted to run on electricity.

The construction of Ball House and Observatory cost $12,132.45. The main building is 15’ high by 15’ deep and 24’ wide. The ball tower was 44’ high. The Observatory was equipped with a 42-inch telescope, a sextant and two astronomical clocks provided by the provincial government of Canada.

In 1974, excavations conducted by Parks Canada revealed a tank constructed of bricks reinforced with metal rods designed to protect the Observatory from lightining.

Building was restored by Public Works Canada in 2007.

Edward David Ashe (England, 1813 – Canada, 1895). Officer of the Royal Navy, astronomer and writer. He arrives in Quebec in 1850 to supervise the construction of observatory and to manage it, bringing with him instruments provided by the Royal Observatory at Greenwich (London). His first duties were to observe star transits and to drop the time ball daily. His solar research marks him as Canada’s first astrophysicist and he became one of the pioneers of astronomical photography. 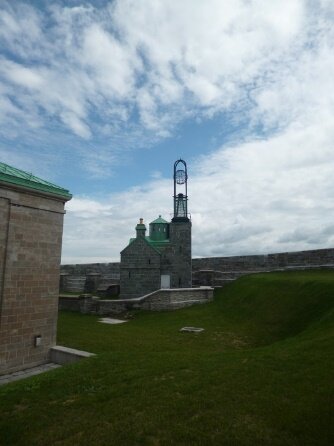 The ancient Observatory and the Ball House. Photo: © ProvinceQuebec.com