St. Peter Street (rue Saint-Pierre) was, at one time, in the beginning of the XIX Century, the financial centre of Lower Canada.

Four banks established here, including the Bank of Montreal and John’s Woolsey’ Quebec Bank which served the timber trade. The Quebec Stock Exchange, founded in 1818, as well as many insurance companies also had their offices on this street.

The concentration of financial institutions on St. Peter Street earned it the nickname of Wall Street of Quebec.

The James Hunt store (58060 St. Peter Street), with living quarters above, was designed by architect J. F. Peachey in 1863 for James Hunt, a merchant and owner of the store located here.

The bas relieves above the windows of James Hunt present four figures. Three of them are of classical figures, but the one on the left is sporting a businessman’s hat of the time and is believed to be a James Hunt’s portrait. 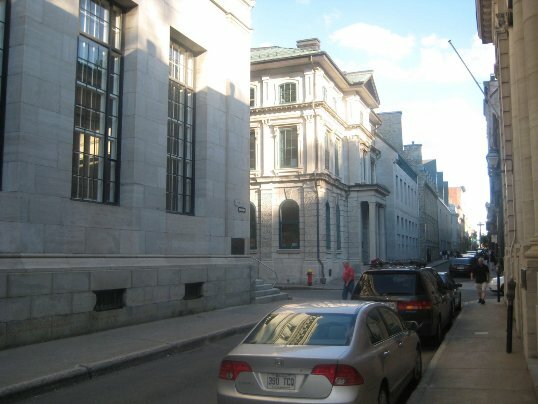