Kirk Hall is a charming house located in the heart of Old Quebec City. With its pretty Lilies in the foreground it looks like a cottage garden.

Kirk Hall ss one of the oldest existing English school buildings in Quebec City. It was built by St. Andrew’s congregation, the oldest English-speaking congregation, of Scottish origin, in Canada, tracing its beginning in 1759.

The Congregation was almost wholly military in character at first, made up for the most part of the 78th Fraser Highlanders in General Wolfe’s Army with their Chaplain, Rev. Robert MacPherson. After merchants from Scotland and New England arrived in Quebec shortly after the Peace Treaty between the Great Britain and France, signed in 1763, the congregation assumed civilian status and was known as The Scotch Congregation.

In 1802, the present St. Andrew’s Church site was granted to the parish by His Majesty George III. The long-contemplated church was dedicated on November 30, 1810, on St. Andrew’s day.

On the same triangular site formed by St. Stanislas, St. Anne and Cook Streets within the walled city,  the Kirk Hall was built in 1829.  It was used, until 1885, as a Protestant School. It was then changed into a residence for the assistant minister. 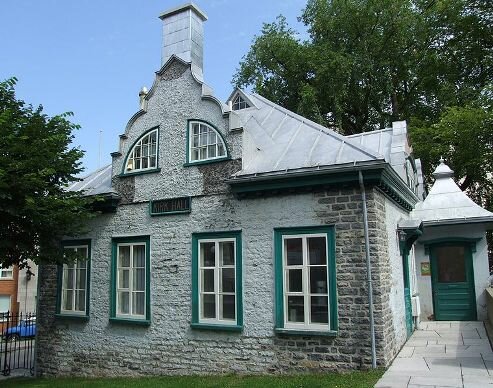 In 1909, the building was changed into a community hall, Sunday school and a residence for the sexton. On the same site, there is also the Manse - Scottish term for minister’s residence - erected in 1837 according to plans drawn up by Frederick Hacker