St. Andrew Presbyterian Church of Quebec City was built on the site granted to the Presbyterian Parish by King George III in 1802.

The congregation of the Church of Scotland included soldiers of the Fraser Highlanders in General Wolfe’s army and merchants from Scotland and New England.

The building was designed by architect John Bryson according to the traditions of Scottish Presbyterian kirks and built in 1810 opposite the jail of Quebec City (which would later become Morrin College). The Celtic Cross is part of the interior décor of the church.

In fact, Quebec City Scots were prominent in the development of Quebec. Prior to the building of this church they held their services in the chapel of the Ursulines of Hotel Dieu and the Jesuit’s College.

The church remains almost unchanged except for the stained glass windows which were a later addition.

The Andrew Presbyterian Church is located at the corner of Ste-Anne and Cook. 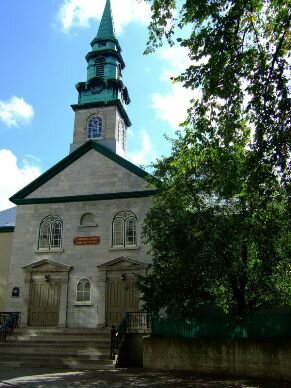