Church of Sainte-Catherine in Pikogan

It was on October 10, 1958 that the Pikogan Reserve, originally called Amos Indian Reserve no. 1, was officially created.

A reserve is government-owned land that has been set aside for the use and benefit of an Aboriginal band. The creation of these reserves marked the beginning of a period of adjustment that was not necessarily without its hardships.

The pressures of an urban and sedentary life were compounded by a socio-economic and educational system that failed to meet Native needs. Despite these difficulties, the Abitibi-winnik have always succeeded in keeping their traditions and culture alive, while incorporating modern tendencies.

The Church of Sainte-Catherine in Pikogan built in 1968 is a fine example of this. The church was erected in the shape of a tepee, using the latest techniques and materials. The interior decoration is the work of local craftsmen applying traditional skills.

Today the Pikogan church is more than a place of worship. It is a place where the history and reality of the Abitibiwinni nation come together.

A visit takes one to the very heart of a nation that played a key role in the history of this region and still contributes today to its development. 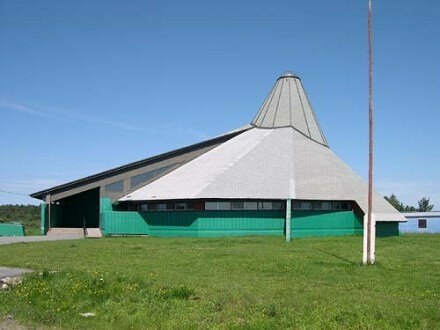