Most of the early settlers in the Eastern Townships were English speaking; the French speaking and Catholic settlers came later, but by 1842, more than half the population of the area were French, and just ten years later, Ste-Cecile-de-Milton community was almost entirely French. The Catholic settlers appealed for the right to establish their own parish because travel was not easy in those days, and even weekly attendance at Mass, let alone daily observance, was not possible.

A first chapel was built in 1842 on land donated by Sir Pierre Lanctot located at about one mile from the present church building. It was a stone house whose basement was used by the sacristan. A second chapel was built in 1846. It was a two-story stone building and the second floor was used as chapel while the first floor was divided into two sections: the parish priest's residence on one side and, on the other side, a room used as a meeting room by parishioners on Sundays and, during the week, as classroom. Converted into a school in 1861, the building was still used as parsonage until 1873.

Thanks to the first resident parish priest, Rev Joseph Gabouty, who arrived in 1855, the present church was inaugurated in 1861 on top of a small hill known as "Cap Rouge". The building is rectangular with a protruding chancel and a semi-circular apse. The plaster vault is shaped as a semicircular arch. Exterior walls are covered with stone.

In 1893, the parish acquired a Casavant organ. 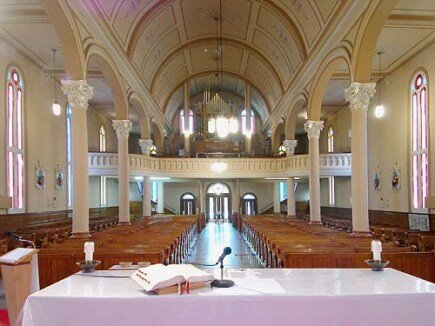